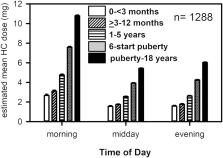 Treatment of classic congenital adrenal hyperplasia (CAH) is necessary to compensate for glucocorticoid/mineralocorticoid deficiencies and to suppress androgen excess. Hydrocortisone (HC) is preferred in growing children with classic CAH but recommendations regarding dosage/administration are inconsistent. The aim of this study was to evaluate HC dosing in children with CAH in relation to chronological age, sex, and phenotype based on a multicenter CAH registry.

A custom-made electronic health record software is used at the participating centers. Pseudonymized data are transferred for central analysis. Parameters were selected based on current guidelines. Descriptive analyses and linear regression models were implemented with SAS 9.4.

Our analyses showed that still a high proportion of children are treated with HC doses higher than recommended. This evaluation provides comprehensive information on nationwide hydrocortisone substitution dosages in children with CAH underlining the benefit of systematic data within a registry to assess daily practice.

P C White,  P Speiser (2000)
More than 90% of cases of congenital adrenal hyperplasia (CAH, the inherited inability to synthesize cortisol) are caused by 21-hydroxylase deficiency. Females with severe, classic 21-hydroxylase deficiency are exposed to excess androgens prenatally and are born with virilized external genitalia. Most patients cannot synthesize sufficient aldosterone to maintain sodium balance and may develop potentially fatal "salt wasting" crises if not treated. The disease is caused by mutations in the CYP21 gene encoding the steroid 21-hydroxylase enzyme. More than 90% of these mutations result from intergenic recombinations between CYP21 and the closely linked CYP21P pseudogene. Approximately 20% are gene deletions due to unequal crossing over during meiosis, whereas the remainder are gene conversions--transfers to CYP21 of deleterious mutations normally present in CYP21P. The degree to which each mutation compromises enzymatic activity is strongly correlated with the clinical severity of the disease in patients carrying it. Prenatal diagnosis by direct mutation detection permits prenatal treatment of affected females to minimize genital virilization. Neonatal screening by hormonal methods identifies affected children before salt wasting crises develop, reducing mortality from this condition. Glucocorticoid and mineralocorticoid replacement are the mainstays of treatment, but more rational dosing and additional therapies are being developed.

Modelling covariance structure in the analysis of repeated measures data.