The role of the arginine metabolome in pain: implications for sickle cell disease 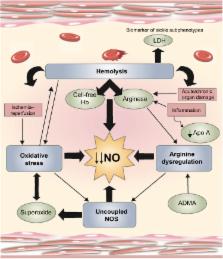 Sickle cell disease (SCD) is the most common hemoglobinopathy in the US, affecting approximately 100,000 individuals in the US and millions worldwide. Pain is the hallmark of SCD, and a subset of patients experience pain virtually all of the time. Of interest, the arginine metabolome is associated with several pain mechanisms highlighted in this review. Since SCD is an arginine deficiency syndrome, the contribution of the arginine metabolome to acute and chronic pain in SCD is a topic in need of further attention. Normal arginine metabolism is impaired in SCD through various mechanisms that contribute to endothelial dysfunction, vaso-occlusion, pulmonary complications, risk of leg ulcers, and early mortality. Arginine is a semiessential amino acid that serves as a substrate for protein synthesis and is the precursor to nitric oxide (NO), polyamines, proline, glutamate, creatine, and agmatine. Since arginine is involved in multiple metabolic processes, a deficiency of this amino acid has the potential to disrupt many cellular and organ functions. NO is a potent vasodilator that is depleted in SCD and may contribute to vaso-occlusive pain. As the obligate substrate for NO production, arginine also plays a mechanistic role in SCD-related pain, although its contribution to pain pathways likely extends beyond NO. Low global arginine bioavailability is associated with pain severity in both adults and children with SCD as well as other non-SCD pain syndromes. Preliminary clinical studies of arginine therapy in SCD demonstrate efficacy in treating acute vaso-occlusive pain, as well as leg ulcers and pulmonary hypertension. Restoration of arginine bioavailability through exogenous supplementation of arginine is, therefore, a promising therapeutic target. Phase II clinical trials of arginine therapy for sickle-related pain are underway and a Phase III randomized controlled trial is anticipated in the near future.

The clinical sequelae of intravascular hemolysis and extracellular plasma hemoglobin: a novel mechanism of human disease.

Peter Hillmen,  Mark Gladwin,  Russell Rother … (2005)
The efficient sequestration of hemoglobin by the red blood cell membrane and the presence of multiple hemoglobin clearance mechanisms suggest a critical need to prevent the buildup of this molecule in the plasma. A growing list of clinical manifestations attributed to hemoglobin release in a variety of acquired and iatrogenic hemolytic disorders suggests that hemolysis and hemoglobinemia should be considered as a novel mechanism of human disease. Pertinent scientific literature databases and references were searched through October 2004 using terms that encompassed various aspects of hemolysis, hemoglobin preparations, clinical symptoms associated with plasma hemoglobin, nitric oxide in hemolysis, anemia, pulmonary hypertension, paroxysmal nocturnal hemoglobinuria, and sickle-cell disease. Hemoglobin is released into the plasma from the erythrocyte during intravascular hemolysis in hereditary, acquired, and iatrogenic hemolytic conditions. When the capacity of protective hemoglobin-scavenging mechanisms has been saturated, levels of cell-free hemoglobin increase in the plasma, resulting in the consumption of nitric oxide and clinical sequelae. Nitric oxide plays a major role in vascular homeostasis and has been shown to be a critical regulator of basal and stress-mediated smooth muscle relaxation and vasomotor tone, endothelial adhesion molecule expression, and platelet activation and aggregation. Thus, clinical consequences of excessive cell-free plasma hemoglobin levels during intravascular hemolysis or the administration of hemoglobin preparations include dystonias involving the gastrointestinal, cardiovascular, pulmonary, and urogenital systems, as well as clotting disorders. Many of the clinical sequelae of intravascular hemolysis in a prototypic hemolytic disease, paroxysmal nocturnal hemoglobinuria, are readily explained by hemoglobin-mediated nitric oxide scavenging. A growing body of evidence supports the existence of a novel mechanism of human disease, namely, hemolysis-associated smooth muscle dystonia, vasculopathy, and endothelial dysfunction.

Marie J Stuart,  Ronald L Nagel,  Winifred Eboh (2015)
With the global scope of sickle-cell disease, knowledge of the countless clinical presentations and treatment of this disorder need to be familiar to generalists, haematologists, internists, and paediatricians alike. Additionally, an underlying grasp of sickle-cell pathophysiology, which has rapidly accrued new knowledge in areas related to erythrocyte and extra-erythrocyte events, is crucial to an understanding of the complexity of this molecular disease with protean manifestations. We highlight studies from past decades related to such translational research as the use of hydroxyurea in treatment, as well as the therapeutic promise of red-cell ion-channel blockers, and antiadhesion and anti-inflammatory therapy. The novel role of nitric oxide in sickle-cell pathophysiology and the range of its potential use in treatment are also reviewed. Understanding of disease as the result of a continuing interaction between basic scientists and clinical researchers is best exemplified by this entity.