Nothing But NET: A Review of Neuroendocrine Tumors and Carcinomas 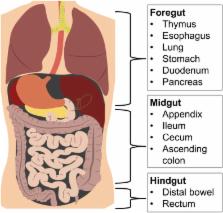 This review covers the diverse topic of neuroendocrine neoplasms (NENs), a relatively rare and heterogeneous tumor type, comprising ~2% of all malignancies, with a prevalence of <200,000 in the United States, which makes it an orphan disease (Basu et al., 2010). 1 For functional purposes, NENs are divided into two groups on the basis of clinical behavior, histology, and proliferation rate: well differentiated (low grade to intermediate grade) neuroendocrine tumors and poorly differentiated (high grade) neuroendocrine carcinoma (Bosman et al., 2010) 2 ; this histological categorization/dichotomization is highly clinically relevant with respect to impact on treatment and prognosis even though it is not absolute since a subset of tumors with a low-grade appearance behaves similarly to high-grade lesions. Given the relative dearth of evidenced-based literature about this orphan disease as a whole (Modlin et al., 2008), 3 since the focus of most articles is on particular anatomic subtypes of NENs (i.e., gastroenteropancreatic or pulmonary), the purpose of this review is to summarize the presentation, pathophysiology, staging, current standard of care treatments, and active areas of current research.

Sunitinib malate for the treatment of pancreatic neuroendocrine tumors.

Denis Smith,  Shi Chen,  Laetitia Dahan … (2011)
The multitargeted tyrosine kinase inhibitor sunitinib has shown activity against pancreatic neuroendocrine tumors in preclinical models and phase 1 and 2 trials. We conducted a multinational, randomized, double-blind, placebo-controlled phase 3 trial of sunitinib in patients with advanced, well-differentiated pancreatic neuroendocrine tumors. All patients had Response Evaluation Criteria in Solid Tumors-defined disease progression documented within 12 months before baseline. A total of 171 patients were randomly assigned (in a 1:1 ratio) to receive best supportive care with either sunitinib at a dose of 37.5 mg per day or placebo. The primary end point was progression-free survival; secondary end points included the objective response rate, overall survival, and safety. The study was discontinued early, after the independent data and safety monitoring committee observed more serious adverse events and deaths in the placebo group as well as a difference in progression-free survival favoring sunitinib. Median progression-free survival was 11.4 months in the sunitinib group as compared with 5.5 months in the placebo group (hazard ratio for progression or death, 0.42; 95% confidence interval [CI], 0.26 to 0.66; P<0.001). A Cox proportional-hazards analysis of progression-free survival according to baseline characteristics favored sunitinib in all subgroups studied. The objective response rate was 9.3% in the sunitinib group versus 0% in the placebo group. At the data cutoff point, 9 deaths were reported in the sunitinib group (10%) versus 21 deaths in the placebo group (25%) (hazard ratio for death, 0.41; 95% CI, 0.19 to 0.89; P=0.02). The most frequent adverse events in the sunitinib group were diarrhea, nausea, vomiting, asthenia, and fatigue. Continuous daily administration of sunitinib at a dose of 37.5 mg improved progression-free survival, overall survival, and the objective response rate as compared with placebo among patients with advanced pancreatic neuroendocrine tumors. (Funded by Pfizer; ClinicalTrials.gov number, NCT00428597.).

Treatment of neuroendocrine carcinomas with combined etoposide and cisplatin. Evidence of major therapeutic activity in the anaplastic variants of these neoplasms.

C MOERTEL,  J. Peter Rubin,  L. Kvols … (1991)
Forty-five patients with metastatic neuroendocrine tumors were treated with a regimen of etoposide 130 mg/m2/d for 3 days plus cisplatin 45 mg/m2/d on days 2 and 3. Both drugs were given by continuous intravenous infusion. Among 27 patients with well-differentiated carcinoid tumors or islet cell carcinomas, only two partial objective tumor regressions were observed (7%). Among 18 patients prospectively classified as having anaplastic neuroendocrine carcinomas, however, there were nine partial regressions and three complete regressions, an overall regression rate of 67%. For anaplastic disease, the median duration of regression was 8 months (range to 21 months). Tumor response was unrelated to primary site, endocrine hyperfunction, or prior therapy experience. The median survival of all patients with anaplastic tumors was 19 months; this seemed favorable when considering the small experiences with these rare tumors reported in the literature. Toxicity, which was severe for most patients, consisted primarily of vomiting, leukopenia, thrombocytopenia, anemia, alopecia, and neuropathy. The anaplastic neuroendocrine tumor is strongly responsive to therapy with combined etoposide and cisplatin. Patients with undifferentiated carcinomas, originating in typical neuroendocrine tumor sites (small and large bowel, pancreas, and stomach) or of unknown origin, who have consistent histologic findings by light microscopy should be evaluated for this possibility with appropriate immune staining or electron microscopy.