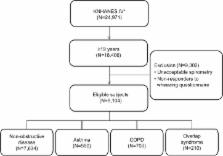 Overlap syndrome shares features of both asthma and chronic obstructive pulmonary disease (COPD). The aim of this study was to investigate characteristics of overlap syndrome and their effect on self-rated health (SRH).

From a total 9,104 subjects, 700 were assigned to the COPD group, 560 to the asthma group, 210 to the overlap syndrome group, and 7,634 to the NOD group. Compared to the other groups, subjects in the overlap syndrome group were more likely to have low lung function, a high proportion of smokers, low socioeconomic status, short education duration, lower SRH, and past diagnosis of pulmonary tuberculosis or bronchiectasis. Multiple logistic regression analysis revealed that both overlap syndrome and asthma groups were independently associated with lower SRH after adjustment for age, sex, socioeconomic status, education level, smoking status, comorbidities, and lung function. Female, old age, low education level, low economic status, smoker and other comorbidities were also associated with lower SRH.

Overlap syndrome was accompanied by high morbidity and was associated with lower SRH, which needs more appropriate care.

Ari Lindqvist,  L Tammilehto,  Tari Haahtela … (2011)
In clinical practice, patients whose airway disease shares features of both asthma and chronic obstructive pulmonary disease (COPD) remain poorly recognized. The study population consisted of 1546 patients with a diagnosis of asthma or COPD or both. Based on patient-reported outcomes and retrospective medical record data, the study population was divided into three groups: ( 1 ) asthma only, ( 2 ) COPD only, and ( 3 ) both asthma and COPD (overlap syndrome group). We evaluated patient characteristics associated with health-related quality of life (HRQoL). In many respects, the overlap group fell between the asthma and COPD groups. In the overlap group, however, HRQoL was the poorest of all. In the logistic regression model, with the asthma group as the reference, both the overlap and the COPD group showed higher risk for low HRQoL [odd ratio (OR): 1.9; 95% confidence interval (CI): 1.2-3.2; and OR: 1.8, 95% CI: 1.0-3.2; respectively]. In addition, female gender, obesity, duration of disease, disability pension, and coexisting cardiovascular disease were associated with low HRQoL across the study population. Patients with overlapping asthma and COPD differed from those patients with asthma or COPD only. Overlap syndrome was associated with low HRQoL.

The proportional Venn diagram of obstructive lung disease: two approximations from the United States and the United Kingdom.

Joan B Soriano,  Kourtney J. Davis,  Bobbie Coleman … (2003)
The nonproportional Venn diagram of obstructive lung disease (OLD) produced for the 1995 American Thoracic Society guidelines has not been quantified. We aim to quantify the proportion of the general population with OLD and the intersections of physician-diagnosed asthma, chronic bronchitis, and emphysema in the United States and the United Kingdom, and to examine the relationship to obstructive spirometry. We analyzed data from the US National Health and Nutrition Examination (NHANES) III survey (1988 to 1994) and the UK General Practice Research Database for the year 1998. The areas of intersection among the three OLD conditions produced seven mutually exclusive disease groups. The asthma-only group was the largest proportion of OLD patients, accounting for 50.3% and 79.4% of all OLD patients in the United States and the United Kingdom, respectively, and decreased with increasing age. Overall, 17% and 19% of OLD patients in the United States and in the United Kingdom, respectively, reported more than one OLD condition, and this percentage increased with age. According to the spirometry data from NHANES III, only 37.4% of emphysema-only patients had objective airflow obstruction. The prevalence of airflow obstruction was significantly higher among participants with combinations of emphysema and chronic bronchitis (57.7%), with emphysema and asthma (51.9%), and with all three OLD diseases concomitantly (52.0%). Concomitant diagnosis of asthma, chronic bronchitis, or emphysema is common among OLD patients from the general population, particularly in adults aged > or = 50 years.