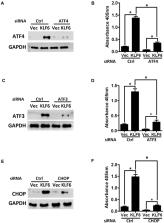 Many studies have confirmed that high myopia is related to the high prevalence of cataracts, which results from apoptosis of lens epithelial cells (LECs) due to endoplasmic reticulum stress. Krüppel-like factor 6 (KLF6) is a tumor suppressor that is involved in the regulation of cell proliferation and apoptosis.

KLF6, ATF4, ATF3, and CHOP were ectopically expressed using cDNAs subcloned into the pCDNA3.1+ vector. ATF4, ATF3, and CHOP knockdown were performed by small interfering RNA (siRNA). Expression of relative gene was tested using QT-PCR and western-blot. Then, accompanied by UVB stimulation, cell viability was measured by CCK-8 assay; The cell damage was examined by live & dead staining; The apoptotic markers Bax and Bcl-2 were detected by immunoblotting; Quantitative apoptotic levels were measured with the Apoptosis Detection Kit; The expression level of reactive oxygen-free radical (ROS) was analyzed by DCFH-DA` probe.

The ATF4-ATF3-CHOP pathway plays an important role in KLF6-induced apoptosis in HLECs. Our results increase our understanding of the mechanisms that regulate LEC apoptosis and contribute to the development of a new preventative strategy for cataract.

The Role of the PERK/eIF2α/ATF4/CHOP Signaling Pathway in Tumor Progression During Endoplasmic Reticulum Stress.

W Rozpedek,  Patrycja Pytel,  B. Mucha … (2016)
Hypoxia is a major hallmark of the tumor microenvironment that is strictly associated with rapid cancer progression and induction of metastasis. Hypoxia inhibits disulfide bond formation and impairs protein folding in the Endoplasmic Reticulum (ER). The stress in the ER induces the activation of Unfolded Protein Response (UPR) pathways via the induction of protein kinase RNA-like endoplasmic reticulum kinase (PERK). As a result, the level of phosphorylated Eukaryotic Initiation Factor 2 alpha (eIF2α) is markedly elevated, resulting in the promotion of a pro-adaptive signaling pathway by the inhibition of global protein synthesis and selective translation of Activating Transcription Factor 4 (ATF4). On the contrary, during conditions of prolonged ER stress, pro-adaptive responses fail and apoptotic cell death ensues. Interestingly, similar to the activity of the mitochondria, the ER may also directly activate the apoptotic pathway through ER stress-mediated leakage of calcium into the cytoplasm that leads to the activation of death effectors. Apoptotic cell death also ensues by ATF4-CHOP- mediated induction of several pro-apoptotic genes and suppression of the synthesis of anti-apoptotic Bcl-2 proteins. Advancing molecular insight into the transition of tumor cells from adaptation to apoptosis under hypoxia-induced ER stress may provide answers on how to overcome the limitations of current anti-tumor therapies. Targeting components of the UPR pathways may provide more effective elimination of tumor cells and as a result, contribute to the development of more promising anti-tumor therapeutic agents.

The PERK/eIF2alpha/ATF4 module of the UPR in hypoxia resistance and tumor growth.

D Fels,  Constantinos Koumenis (2006)
Hypoxia is a dynamic feature of the tumor microenvironment that contributes to cancer progression. In order to adapt and overcome hypoxic stress, tumor cells activate survival pathways that attempt to couple metabolic processes to reduced energy availability due to oxygen deprivation. While the hypoxia-inducible factors HIF-1 and HIF-2 are critical to the cellular response to hypoxia, HIF-independent processes are known to contribute to this adaptation. Recent evidence demonstrates that hypoxia activates components of the Unfolded Protein Response (UPR), a coordinated program that regulates cellular adaptation to increased levels of unfolded proteins in the endoplasmic reticulum (ER). Here we review the evidence implicating the ER kinase PERK, its downstream target translation initiation factor eIF2alpha, and the subsequent translational upregulation of the transcription factor ATF4 in this response. Not only are cells with compromised PERK-eIF2alpha-ATF4 signaling more sensitive to hypoxic stress in vitro but they also form tumors that grow slower in vivo with smaller hypoxic areas, indicating that the PERK-eIF2alpha-ATF4 pathway confers a survival advantage for tumor cells under hypoxia. These results, together with evidence for an involvement of other UPR pathways and ER stress proteins in hypoxia tolerance and tumor maintenance, point to a central role for UPR activation in tumor progression and suggest that this response may offer an attractive target for new anti-tumor modalities.

M. Chan,  John Martignetti,  John K. Heath … (2001)
Kruppel-like factor 6 (KLF6) is a zinc finger transcription factor of unknown function. Here, we show that the KLF6 gene is mutated in a subset of human prostate cancer. Loss-of-heterozygosity analysis revealed that one KLF6 allele is deleted in 77% (17 of 22) of primary prostate tumors. Sequence analysis of the retained KLF6 allele revealed mutations in 71% of these tumors. Functional studies confirm that whereas wild-type KLF6 up-regulates p21 (WAF1/CIP1) in a p53-independent manner and significantly reduces cell proliferation, tumor-derived KLF6 mutants do not. Our data suggest that KLF6 is a tumor suppressor gene involved in human prostate cancer.