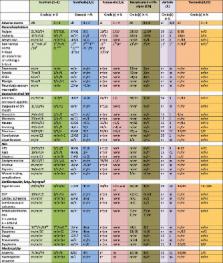 Leah Haworth,  Douglas Schwartzentruber,  J Yang … (2003)
Mutations in the tumor-suppressor gene VHL cause oversecretion of vascular endothelial growth factor by clear-cell renal carcinomas. We conducted a clinical trial to evaluate bevacizumab, a neutralizing antibody against vascular endothelial growth factor, in patients with metastatic renal-cell carcinoma. A randomized, double-blind, phase 2 trial was conducted comparing placebo with bevacizumab at doses of 3 and 10 mg per kilogram of body weight, given every two weeks; the time to progression of disease and the response rate were primary end points. Crossover from placebo to antibody treatment was allowed, and survival was a secondary end point. Minimal toxic effects were seen, with hypertension and asymptomatic proteinuria predominating. The trial was stopped after the interim analysis met the criteria for early stopping. With 116 patients randomly assigned to treatment groups (40 to placebo, 37 to low-dose antibody, and 39 to high-dose antibody), there was a significant prolongation of the time to progression of disease in the high-dose--antibody group as compared with the placebo group (hazard ratio, 2.55; P 0.20 for all comparisons). Bevacizumab can significantly prolong the time to progression of disease in patients with metastatic renal-cell cancer. Copyright 2003 Massachusetts Medical Society

Zdravko V Milanov,  M. G. Benedetti,  Robert W. Biggs … (2005)
Kinase inhibitors show great promise as a new class of therapeutics. Here we describe an efficient way to determine kinase inhibitor specificity by measuring binding of small molecules to the ATP site of kinases. We have profiled 20 kinase inhibitors, including 16 that are approved drugs or in clinical development, against a panel of 119 protein kinases. We find that specificity varies widely and is not strongly correlated with chemical structure or the identity of the intended target. Many novel interactions were identified, including tight binding of the p38 inhibitor BIRB-796 to an imatinib-resistant variant of the ABL kinase, and binding of imatinib to the SRC-family kinase LCK. We also show that mutations in the epidermal growth factor receptor (EGFR) found in gefitinib-responsive patients do not affect the binding affinity of gefitinib or erlotinib. Our results represent a systematic small molecule-protein interaction map for clinical compounds across a large number of related proteins.