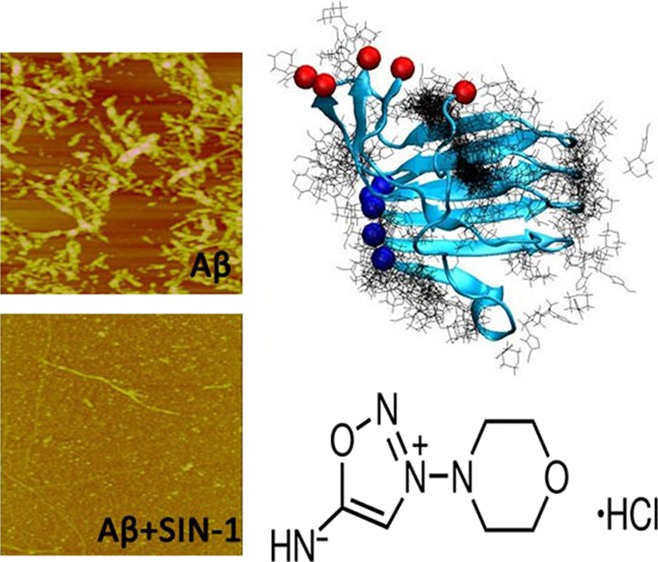 Cardiovascular disease (CVD) and Alzheimer’s disease (AD) have a mutual cause-and-effect relationship, and they share some common risk factors. Although numerous Food and Drug Administration (FDA)-approved drugs have been developed for CVD treatment, no drugs are clinically available for AD treatment. Given the common disease-causing factors and links between the two diseases and the well-demonstrated drugs for CVD, we propose to re-examine the new potential of the existing CVD drugs as amyloid-β (Aβ) inhibitors. 3-Morpholinosydnonimine hydrochloride (SIN-1) is an FDA-approved drug for inhibiting platelet aggregation in CVD. Herein, we examine the inhibition activity of SIN-1 on the aggregation and toxicity of Aβ 1–42 using combined experimental and computational approaches. Collective experimental data from ThT, circular dichroism, and atomic force microscopy demonstrate that SIN-1 can effectively inhibit amyloid formation at every stage of Aβ aggregation by prolonging lag phase, slowing down aggregation rate, and reducing final fibril formation. The cell viability assay also shows that SIN-1 enables the protection of SH-SY5Y cells from Aβ-induced cell toxicity. Such an inhibition effect is attributed to interference with the structural transition of Aβ toward a β-sheet structure by SIN-1. Furthermore, molecular dynamic simulations confirm that SIN-1 preferentially binds to the C-terminal β-sheet grooves of an Aβ oligomer and consequently disrupts the β-sheet structure of Aβ and Aβ–Aβ association, explaining experimental observations. This work discovers a new function of SIN-1, making it a promising compound with dual protective roles in inhibiting both platelet and Aβ aggregations against CVD and AD.

Mahiuddin Ahmed,  Judianne Davis,  Darryl Aucoin … (2010)
The Aβ42 peptide rapidly aggregates to form oligomers, protofibils and fibrils en route to the deposition of amyloid plaques associated with Alzheimer's disease. We show that low temperature and low salt can stabilize disc-shaped oligomers (pentamers) that are significantly more toxic to murine cortical neurons than protofibrils and fibrils. We find that these neurotoxic oligomers do not have the β-sheet structure characteristic of fibrils. Rather, the oligomers are composed of loosely aggregated strands whose C-terminus is protected from solvent exchange and which have a turn conformation placing Phe19 in contact with Leu34. On the basis of NMR spectroscopy, we show that the structural conversion of Aβ42 oligomers to fibrils involves the association of these loosely aggregated strands into β-sheets whose individual β-strands polymerize in a parallel, in-register orientation and are staggered at an inter-monomer contact between Gln15 and Gly37.

Ehud Gazit,  Yair Porat,  Adel Abramowitz (2005)
The formation of well-ordered fibrillar protein deposits is common to a large group of amyloid-associated disorders. This group consists of several major human diseases such as Alzheimer's disease, Parkinson's disease, prion diseases, and type II diabetes. Currently, there is no approved therapeutic agent directed towards the formation of fibrillar assemblies, which have been recently shown to have a key role in the cytotoxic nature of amyloidogenic proteins. One important approach in the development of therapeutic agents is the use of small molecules that specifically and efficiently inhibit the aggregation process. Several small polyphenol molecules have been demonstrated to remarkably inhibit the formation of fibrillar assemblies in vitro and their associated cytotoxicity. Yet, the inhibition mechanism was mostly attributed to the antioxidative properties of these polyphenol compounds. Based on several observations demonstrating that polyphenols are capable of inhibiting amyloid fibril formation in vitro, regardless of oxidative conditions, and in view of their structural similarities we suggest an additional mechanism of action. This mechanism is assuming structural constraints and specific aromatic interactions, which direct polyphenol inhibitors to the amyloidogenic core. This proposed mechanism is highly relevant for future de novo inhibitors' design as therapeutic agents for the treatment of amyloid-associated diseases.