The Emergence and Early Evolution of Biological Carbon-Fixation 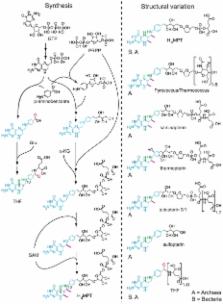 into living matter sustains all life on Earth, and embeds the biosphere within geochemistry. The six known chemical pathways used by extant organisms for this function are recognized to have overlaps, but their evolution is incompletely understood. Here we reconstruct the complete early evolutionary history of biological carbon-fixation, relating all modern pathways to a single ancestral form. We find that innovations in carbon-fixation were the foundation for most major early divergences in the tree of life. These findings are based on a novel method that fully integrates metabolic and phylogenetic constraints. Comparing gene-profiles across the metabolic cores of deep-branching organisms and requiring that they are capable of synthesizing all their biomass components leads to the surprising conclusion that the most common form for deep-branching autotrophic carbon-fixation combines two disconnected sub-networks, each supplying carbon to distinct biomass components. One of these is a linear folate-based pathway of

reduction previously only recognized as a fixation route in the complete Wood-Ljungdahl pathway, but which more generally may exclude the final step of synthesizing acetyl-CoA. Using metabolic constraints we then reconstruct a “phylometabolic” tree with a high degree of parsimony that traces the evolution of complete carbon-fixation pathways, and has a clear structure down to the root. This tree requires few instances of lateral gene transfer or convergence, and instead suggests a simple evolutionary dynamic in which all divergences have primary environmental causes. Energy optimization and oxygen toxicity are the two strongest forces of selection. The root of this tree combines the reductive citric acid cycle and the Wood-Ljungdahl pathway into a single connected network. This linked network lacks the selective optimization of modern fixation pathways but its redundancy leads to a more robust topology, making it more plausible than any modern pathway as a primitive universal ancestral form.

into living matter. A wide range of evidence also suggests that the earliest life forms on Earth likewise derived their carbon from

. From these two observations one can assume that the global biological carbon cycle has always been based on

, and we show here that this assumption can be used as a powerful constraint to help organize and explain the deep evolution of life on Earth. Using a novel method that fully integrates aspects of metabolic and phylogenetic analysis, we are able to reconstruct the complete early evolutionary history of biological carbon-fixation, relating all ways in which life today performs this function to a single ancestral form. The diversification in carbon-fixation appears to underpin most of the deepest branches in the tree of life, and this early metabolic diversification – reaching back to the first cells – appears to have been driven not by the contingencies of history, but by direct links to the physical-chemical environment. The ancestral carbon-fixation pathway that we identify is different from any modern form, but better suited to the capabilities of the earliest primitive cells.

Ongoing and future developments at the Universal Protein Resource

emmanuel boutet,  Claire O'Donovan,  Amos Bairoch (2010)
The primary mission of Universal Protein Resource (UniProt) is to support biological research by maintaining a stable, comprehensive, fully classified, richly and accurately annotated protein sequence knowledgebase, with extensive cross-references and querying interfaces freely accessible to the scientific community. UniProt is produced by the UniProt Consortium which consists of groups from the European Bioinformatics Institute (EBI), the Swiss Institute of Bioinformatics (SIB) and the Protein Information Resource (PIR). UniProt is comprised of four major components, each optimized for different uses: the UniProt Archive, the UniProt Knowledgebase, the UniProt Reference Clusters and the UniProt Metagenomic and Environmental Sequence Database. UniProt is updated and distributed every 4 weeks and can be accessed online for searches or download at http://www.uniprot.org.

Reconstruction of biochemical networks in microorganisms.

Bernhard Palsson,  Jennifer Reed,  Ines Thiele … (2009)
Systems analysis of metabolic and growth functions in microbial organisms is rapidly developing and maturing. Such studies are enabled by reconstruction, at the genomic scale, of the biochemical reaction networks that underlie cellular processes. The network reconstruction process is organism specific and is based on an annotated genome sequence, high-throughput network-wide data sets and bibliomic data on the detailed properties of individual network components. Here we describe the process that is currently used to achieve comprehensive network reconstructions and discuss how these reconstructions are curated and validated. This review should aid the growing number of researchers who are carrying out reconstructions for particular target organisms.

Publisher ID: PCOMPBIOL-D-11-01344
DOI: 10.1371/journal.pcbi.1002455
PMC ID: 3334880
PubMed ID: 22536150
Copyright statement: Braakman, Smith. This is an open-access article distributed under the terms of the Creative Commons Attribution License, which permits unrestricted use, distribution, and reproduction in any medium, provided the original author and source are credited.