Leprosy-Related Chronic Arthritis with an Abundance of Mycobacterium Leprae in the Synovial Fluid: A Rare Case 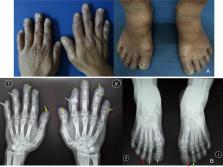 Bone and joint involvements are the most common manifestation in leprosy, after cutaneous and neurological manifestations, yet are underdiagnosed and rarely reported. We report a case of lepromatous leprosy in a 41-year-old male with bone and joint changes. Physical examination revealed a leonine face, madarosis, hypesthetic hypopigmented macules on the back, and swelling of fingers and toes. Acid-fast bacilli from slit-skin smear and synovial fluid in an interphalangeal joint of the hand were found. Radiographic features showed osteolysis and destruction of some phalanges of the hands, bone erosion and destruction of some phalanges of the feet, as well as destruction and subluxation of some hand joints. The patient was given multidrug therapy for multibacillary leprosy, resulting in the reduction of swelling in fingers and toes. In conclusion, the examination of bone and joint changes in leprosy patients is important for early detection and management of musculoskeletal complications, to prevent future deformities and disabilities.

Vikas Agarwal, Anupam Wakhlu, Sandeep Chauhan (2010)
Leprosy, a chronic granulomatous infection caused by Mycobacterium leprae, classically presents with cutaneous and neurological manifestations. Musculoskeletal involvement though third most common is underdiagnosed and underreported. It may manifest in the form of Charcot's arthropathy, acute symmetrical polyarthritis or swollen hands and feet syndrome during lepra reactions, insidious-onset chronic symmetrical polyarthritis mimicking RA or as isolated tenosynovitis or tenosynovitis associated with arthritis or neuropathy. At times, articular involvement may be the sole presenting manifestation even without cutaneous lesions. Other rheumatological manifestations occasionally reported are enthesitis, sacroiliitis, cryoglobulinaemic vasculitis and DM. With increasing travel of population between tropical and temperate zones, it is likely that rheumatology clinics in countries free of leprosy may come across cases of leprosy with rheumatological manifestations. Delay in diagnosis and management may be detrimental and may result in deformities and loss of function. Not only this, but recent reports of leprosy being diagnosed in native white populations following anti-TNF-α therapy should alert rheumatologists across the globe to be more familiar with this disease. This review is aimed at presenting a comprehensive clinical scenario of various rheumatological manifestations of leprosy to sensitize rheumatologists and physicians across the continents.

Articular inflammatory manifestations in patients with different forms of leprosy.

C Nigro Neto, W Cossermelli (1997)
To study the articular inflammatory manifestations of leprosy. Sixty patients with leprosy from a public clinic in São Paulo, Brazil, participated in a study regarding their articular manifestations. The diagnosis and classification of leprosy were established by the clinical picture, skin smears, skin biopsy, and delayed hypersensitivity test to Mycobacterium leprae antigens (Mitsuda test). According to the Madrid and Ridley-Jopling classifications, 46 patients had lepromatous leprosy, 7 had borderline leprosy, 4 had tuberculoid leprosy, and 3 had indeterminate leprosy. History, general and articular examinations, and roentgenograms were employed and complemented in several cases by scintigraphic examinations with technetium methylene diphosphonate and computed tomographic studies. Three patients were excluded from study due to an association with a rheumatic disease. Among the 57 remaining patients, 44 had peripheral arthritis characterized by involvement of small joints (23/44), large joints (4/44), or both (17/44). The mean duration of arthritis was 11 years (range 1 mo to 51 yrs). Arthritis was detected in all subtypes of patients with leprosy. Supplementary radiological evaluation established the extent of inflammation and diagnosis of sacroiliitis. The diagnosis of sacroiliitis, based on the presence of sclerosis, erosions, and narrowing of the cartilage space in the sacroiliac joints, was established in 35 of 55 radiographs. Sacroiliitis varied from grade I to III, according to the Bennet and Wood classification, and was bilateral in most cases (30/35). There was no significant correlation between low back pain and the finding of sacroiliitis. Articular inflammatory manifestations may exist in patients with different forms of leprosy, and can follow a chronic course. In addition, sacroiliitis is a common, previously unrecognized manifestation in patients with leprosy.

Clinical and laboratory studies of arthritis in leprosy.

S Atkin, A el-Ghobarey, Solimán Kamel … (1989)
Arthritis associated with leprosy is underreported. In Egypt 66 patients from a leprosy colony were studied, 20 of whom had arthropathy. This was characterised by an inflammatory symmetrical peripheral polyarthritis. The wrist, metacarpal and proximal interphalangeal joints of the hands, the knees, and the metatarsophalangeal joints of the feet were affected with associated morning stiffness. The arthritis was erosive in 11 out of 20 patients, had no features of the arthritis associated with erythema nodosum leprosum reactions, but symptomatically responded to antileprosy treatment. This arthritis would seem to be a previously unrecognised feature of leprosy.