Can intractable discogenic back pain be managed by low-level laser therapy without recourse to operative intervention? 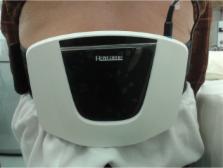 The aim of the study reported here was to investigate the possible clinical role of low-level laser therapy (LLLT) in discogenic back pain patients who failed to respond to a conventional physical therapy program to avoid recourse to operative intervention.

The paper reports on the long-term mean 5-year prospective follow-up of a patient cohort of 50 unselected patients visiting our tertiary referral pain center for discogenic back pain who had had a single-level lesion documented by magnetic resonance imaging followed by subsequent discography to confirm the affected disc being the pain generator. All of the patients who entered the study had failed response to a combination of nonsteroidal anti-inflammatory agents and had had not less than 3 months of conventional physical therapy. LLLT, at a wavelength of 810 nm wavelength emitted from a GaAIAs semiconductor laser device with 5.4 J per point and a power density of 20 mW/cm 2, was employed. The treatment regimen consisted of three sessions of treatment per week for 12 consecutive weeks.

All but one patient had significant improvement in their Oswestry Disability Index score, from a mean of 50% score to a mean of 10% score, at the end of treatment at 12 weeks. In addition, surprisingly, the improvement was found maintained at follow-up assessments 1 year and 5 years later. The one patient among the 50 patients who failed to respond eventually required surgery, while the others did not require surgery.

We conclude that LLLT is a viable option in the conservative treatment of discogenic back pain, with a positive clinical result of more than 90% efficacy, not only in the short-term but also in the long-term, with lasting benefits.

O. Baker,  F A Duck,  V. Robertson (2001)
Almost 2 decades ago, it was pointed out that physical therapists tended to overlook the tenuous nature of the scientific basis for the use of therapeutic ultrasound. The purpose of this review is to examine the literature regarding the biophysical effects of therapeutic ultrasound to determine whether these effects may be considered sufficient to provide a reason (biological rationale) for the use of insonation for the treatment of people with pain and soft tissue injury. This review does not discuss articles that examined the clinical usefulness of ultrasound (see article by Robertson and Baker titled "A Review of Therapeutic Ultrasound: Effectiveness Studies" in this issue). The frequently described biophysical effects of ultrasound either do not occur in vivo under therapeutic conditions or have not been proven to have a clinical effect under these conditions. This review reveals that there is currently insufficient biophysical evidence to provide a scientific foundation for the clinical use of therapeutic ultrasound for the treatment of people with pain and soft tissue injury.

Power density and exposure time of He-Ne laser irradiation are more important than total energy dose in photo-biomodulation of human fibroblasts in vitro.

Peter Bär,  Harry van Goor (1991)
The absorption spectrum of human fibroblast monolayers showed several absorption peaks, among them one at a wave-length of 630 nm. Cultures of these fibroblasts were subjected to He-Ne laser (632.8 nm) irradiation of various energy doses by varying power density and exposure time. On three consecutive days the cell monolayers were irradiated for periods between 0.5 and 10 min. Laser power varied from 0.55 to 5.98 mW. Both cell number and collagen type I production were determined for each irradiation condition within one experiment. Results show that laser power below 2.91 mW could enhance cell proliferation (as determined by cell counting), whereas higher laser power (5.98 mW) had no effect. Stimulatory effects were most pronounced at irradiation times between 0.5 and 2 min. Collagen type I production (as determined by an ELISA) was affected in the opposite direction to cell proliferation: when the cell proliferation was increased, collagen type I production was decreased. From these experiments it is clear that exposure time and power density determine the effects of laser irradiation. Both stimulation and inhibition of the observed cell properties can be obtained with the same laser on the same cells.

Ljubica M Konstantinovic,  Zeljko M Kanjuh,  Andjela N Milovanovic … (2010)
The aim of this study was to investigate the clinical effects of low-level laser therapy (LLLT) in patients with acute low back pain (LBP) with radiculopathy.