Fundamentals of glycogen metabolism for coaches and athletes 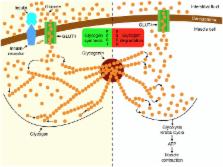 The ability of athletes to train day after day depends in large part on adequate restoration of muscle glycogen stores, a process that requires the consumption of sufficient dietary carbohydrates and ample time. Providing effective guidance to athletes and others wishing to enhance training adaptations and improve performance requires an understanding of the normal variations in muscle glycogen content in response to training and diet; the time required for adequate restoration of glycogen stores; the influence of the amount, type, and timing of carbohydrate intake on glycogen resynthesis; and the impact of other nutrients on glycogenesis. This review highlights the practical implications of the latest research related to glycogen metabolism in physically active individuals to help sports dietitians, coaches, personal trainers, and other sports health professionals gain a fundamental understanding of glycogen metabolism, as well as related practical applications for enhancing training adaptations and preparing for competition.

Carbohydrates for training and competition.

B Burke,  Asker Jeukendrup,  Esther Wong … (2010)
An athlete's carbohydrate intake can be judged by whether total daily intake and the timing of consumption in relation to exercise maintain adequate carbohydrate substrate for the muscle and central nervous system ("high carbohydrate availability") or whether carbohydrate fuel sources are limiting for the daily exercise programme ("low carbohydrate availability"). Carbohydrate availability is increased by consuming carbohydrate in the hours or days prior to the session, intake during exercise, and refuelling during recovery between sessions. This is important for the competition setting or for high-intensity training where optimal performance is desired. Carbohydrate intake during exercise should be scaled according to the characteristics of the event. During sustained high-intensity sports lasting ~1 h, small amounts of carbohydrate, including even mouth-rinsing, enhance performance via central nervous system effects. While 30-60 g · h(-1) is an appropriate target for sports of longer duration, events >2.5 h may benefit from higher intakes of up to 90 g · h(-1). Products containing special blends of different carbohydrates may maximize absorption of carbohydrate at such high rates. In real life, athletes undertake training sessions with varying carbohydrate availability. Whether implementing additional "train-low" strategies to increase the training adaptation leads to enhanced performance in well-trained individuals is unclear.

Skeletal muscle adaptation and performance responses to once a day versus twice every second day endurance training regimens.

Wee Kian Yeo,  Carl Paton,  Andrew Garnham … (2008)
We determined the effects of a cycle training program in which selected sessions were performed with low muscle glycogen content on training capacity and subsequent endurance performance, whole body substrate oxidation during submaximal exercise, and several mitochondrial enzymes and signaling proteins with putative roles in promoting training adaptation. Seven endurance-trained cyclists/triathletes trained daily (High) alternating between 100-min steady-state aerobic rides (AT) one day, followed by a high-intensity interval training session (HIT; 8 x 5 min at maximum self-selected effort) the next day. Another seven subjects trained twice every second day (Low), first undertaking AT, then 1-2 h later, the HIT. These training schedules were maintained for 3 wk. Forty-eight hours before and after the first and last training sessions, all subjects completed a 60-min steady-state ride (60SS) followed by a 60-min performance trial. Muscle biopsies were taken before and after 60SS, and rates of substrate oxidation were determined throughout this ride. Resting muscle glycogen concentration (412 +/- 51 vs. 577 +/- 34 micromol/g dry wt), rates of whole body fat oxidation during 60SS (1,261 +/- 247 vs. 1,698 +/- 174 micromol.kg(-1).60 min(-1)), the maximal activities of citrate synthase (45 +/- 2 vs. 54 +/- 1 mmol.kg dry wt(-1).min(-1)), and beta-hydroxyacyl-CoA-dehydrogenase (18 +/- 2 vs. 23 +/- 2 mmol.kg dry wt(-1).min(-1)) along with the total protein content of cytochrome c oxidase subunit IV were increased only in Low (all P < 0.05). Mitochondrial DNA content and peroxisome proliferator-activated receptor-gamma coactivator-1alpha protein levels were unchanged in both groups after training. Cycling performance improved by approximately 10% in both Low and High. We conclude that compared with training daily, training twice every second day compromised high-intensity training capacity. While selected markers of training adaptation were enhanced with twice a day training, the performance of a 1-h time trial undertaken after a 60-min steady-state ride was similar after once daily or twice every second day training programs.

Robert W. Morton,  Chris McGlory,  Stuart M Phillips (2015)
Skeletal muscle mass is regulated by a balance between muscle protein synthesis (MPS) and muscle protein breakdown (MPB). In healthy humans, MPS is more sensitive (varying 4–5 times more than MPB) to changes in protein feeding and loading rendering it the primary locus determining gains in muscle mass. Performing resistance exercise (RE) followed by the consumption of protein results in an augmentation of MPS and, over time, can lead to muscle hypertrophy. The magnitude of the RE-induced increase in MPS is dictated by a variety of factors including: the dose of protein, source of protein, and possibly the distribution and timing of post-exercise protein ingestion. In addition, RE variables such as frequency of sessions, time under tension, volume, and training status play roles in regulating MPS. This review provides a brief overview of our current understanding of how RE and protein ingestion can influence gains in skeletal muscle mass in young, healthy individuals. It is the goal of this review to provide nutritional recommendations for optimal skeletal muscle adaptation. Specifically, we will focus on how the manipulation of protein intake during the recovery period following RE augments the adaptive response.

This is an Open Access article distributed under the terms of the Creative Commons Attribution-NonCommercial-NoDerivs licence ( http://creativecommons.org/licenses/by-nc-nd/4.0/), which permits non-commercial reproduction and distribution of the work, in any medium, provided the original work is not altered or transformed in any way, and that the work is properly cited. For commercial re-use, please contactjournals.permissions@oup.com