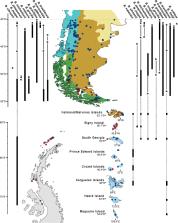 Copepods are present in numerous aquatic environments, playing key roles in food webs, and are thought to be useful indicators of environmental change. Boeckella is a calanoid copepod genus distributed mainly in the Southern Hemisphere, with 14 species reported at higher southern latitudes in South America and Antarctica. We present an updated database of these 14 species of Boeckella generated from a combination of three sources: 1) new field sampling data, 2) published records, and 3) Global Biodiversity Information Facility (GBIF), to provide a comprehensive description of the geographic distribution of the genus south of latitude 40°S in southern South America and the three main terrestrial biogeographic regions of Antarctica. The database includes 380 records, 62 from field sampling, 278 from the literature and 40 from GBIF. Southern South America, including the Falkland/Malvinas Islands, had the highest species richness and number of records (14 and 297, respectively), followed by the sub-Antarctic islands (5 and 34), South Orkney Islands (2 and 14), South Shetland Islands (1 and 23), Antarctic Peninsula (1 and 10) and finally continental Antarctica (1 and 2). Boeckella poppei Mrázek, 1901 is the only representative of the genus, and more widely the only terrestrial/freshwater invertebrate, currently reported from all three main biogeographic regions in Antarctica (sub-Antarctic islands, maritime and continental Antarctic). Future development of molecular systematic studies in this group should contribute to assessing the correspondence between morphological taxonomy and molecular evolutionary radiation.

Biogeographic areas and transition zones of Latin America and the Caribbean islands based on panbiogeographic and cladistic analyses of the entomofauna.

Spatial and temporal variability across life's hierarchies in the terrestrial Antarctic