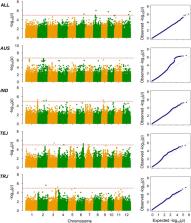 Accumulation of toxic heavy metals and metalloids (THMMs) in crop grain remarkably affects food safety and human health. Reducing the content of THMMs in grain requires the identification and manipulation of the genes regulating their accumulation. This study aimed to determine the genetic variations affecting grain THMM accumulation in rice by using association mapping. We used 276 accessions with 416 K single nucleotide polymorphisms (SNPs) and performed genome-wide association analysis of grain THMM concentrations in rice grown in heavily multi-contaminated farmlands. We detected 22, 17, and 21 quantitative trait loci (QTLs) for grain arsenic, cadmium, and lead concentrations, respectively. Both inter- and intra-subpopulation variants accounted for these QTLs. Most QTLs contained no known THMM-related genes and represented unidentified novel genes. We examined the candidate genes in qGAS1, a QTL for grain arsenic concentration with the best P-value detected for the entire population. We speculated that a transport protein of the multidrug and toxin extrusion family could be the candidate gene for this QTL. Our study suggested that the genetic regulation of grain THMM accumulation is very complex and largely unknown. The QTLs and SNPs identified in this study might help in the identification of new genes regulating THMM accumulation and aid in marker-assisted breeding of rice with low grain THMM content.

Intellectual impairment in children with blood lead concentrations below 10 microg per deciliter.

Nramp5 is a major transporter responsible for manganese and cadmium uptake in rice.

Kengo Yokosho,  Akimasa Sasaki,  Naoki Yamaji … (2012)
Paddy rice (Oryza sativa) is able to accumulate high concentrations of Mn without showing toxicity; however, the molecular mechanisms underlying Mn uptake are unknown. Here, we report that a member of the Nramp (for the Natural Resistance-Associated Macrophage Protein) family, Nramp5, is involved in Mn uptake and subsequently the accumulation of high concentrations of Mn in rice. Nramp5 was constitutively expressed in the roots and encodes a plasma membrane-localized protein. Nramp5 was polarly localized at the distal side of both exodermis and endodermis cells. Knockout of Nramp5 resulted in a significant reduction in growth and grain yield, especially when grown at low Mn concentrations. This growth reduction could be partially rescued by supplying high concentrations of Mn but not by the addition of Fe. Mineral analysis showed that the concentration of Mn and Cd in both the roots and shoots was lower in the knockout line than in wild-type rice. A short-term uptake experiment revealed that the knockout line lost the ability to take up Mn and Cd. Taken together, Nramp5 is a major transporter of Mn and Cd and is responsible for the transport of Mn and Cd from the external solution to root cells.

Kenji Yano,  Eiji Yamamoto,  Koichiro Aya … (2016)
A genome-wide association study (GWAS) can be a powerful tool for the identification of genes associated with agronomic traits in crop species, but it is often hindered by population structure and the large extent of linkage disequilibrium. In this study, we identified agronomically important genes in rice using GWAS based on whole-genome sequencing, followed by the screening of candidate genes based on the estimated effect of nucleotide polymorphisms. Using this approach, we identified four new genes associated with agronomic traits. Some genes were undetectable by standard SNP analysis, but we detected them using gene-based association analysis. This study provides fundamental insights relevant to the rapid identification of genes associated with agronomic traits using GWAS and will accelerate future efforts aimed at crop improvement.

Edited by: Luigi Cattivelli, The Council for Agricultural Research and Economics, Italy