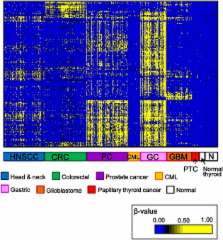 Marelize van Wyk,  Houtan Noushmehr,  Peter Laird … (2012)
Colorectal cancer (CRC) is a heterogeneous disease in which unique subtypes are characterized by distinct genetic and epigenetic alterations. Here we performed comprehensive genome-scale DNA methylation profiling of 125 colorectal tumors and 29 adjacent normal tissues. We identified four DNA methylation-based subgroups of CRC using model-based cluster analyses. Each subtype shows characteristic genetic and clinical features, indicating that they represent biologically distinct subgroups. A CIMP-high (CIMP-H) subgroup, which exhibits an exceptionally high frequency of cancer-specific DNA hypermethylation, is strongly associated with MLH1 DNA hypermethylation and the BRAF(V600E) mutation. A CIMP-low (CIMP-L) subgroup is enriched for KRAS mutations and characterized by DNA hypermethylation of a subset of CIMP-H-associated markers rather than a unique group of CpG islands. Non-CIMP tumors are separated into two distinct clusters. One non-CIMP subgroup is distinguished by a significantly higher frequency of TP53 mutations and frequent occurrence in the distal colon, while the tumors that belong to the fourth group exhibit a low frequency of both cancer-specific DNA hypermethylation and gene mutations and are significantly enriched for rectal tumors. Furthermore, we identified 112 genes that were down-regulated more than twofold in CIMP-H tumors together with promoter DNA hypermethylation. These represent ∼7% of genes that acquired promoter DNA methylation in CIMP-H tumors. Intriguingly, 48/112 genes were also transcriptionally down-regulated in non-CIMP subgroups, but this was not attributable to promoter DNA hypermethylation. Together, we identified four distinct DNA methylation subgroups of CRC and provided novel insight regarding the role of CIMP-specific DNA hypermethylation in gene silencing.

This article was submitted to Epigenomics and Epigenetics, a section of the journal Frontiers in Genetics.