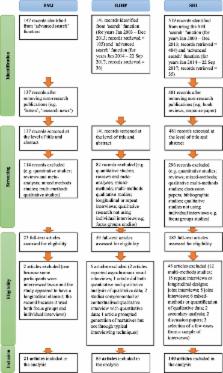 A systematic analysis of single-interview-per-participant designs within three health-related journals from the disciplines of psychology, sociology and medicine, over a 15-year period, was conducted to examine whether and how sample sizes were justified and how sample size was characterised and discussed by authors. Data pertinent to sample size were extracted and analysed using qualitative and quantitative analytic techniques.

Our findings demonstrate that provision of sample size justifications in qualitative health research is limited; is not contingent on the number of interviews; and relates to the journal of publication. Defence of sample size was most frequently supported across all three journals with reference to the principle of saturation and to pragmatic considerations. Qualitative sample sizes were predominantly – and often without justification – characterised as insufficient (i.e., ‘small’) and discussed in the context of study limitations. Sample size insufficiency was seen to threaten the validity and generalizability of studies’ results, with the latter being frequently conceived in nomothetic terms.

We recommend, firstly, that qualitative health researchers be more transparent about evaluations of their sample size sufficiency, situating these within broader and more encompassing assessments of data adequacy. Secondly, we invite researchers critically to consider how saturation parameters found in prior methodological studies and sample size community norms might best inform, and apply to, their own project and encourage that data adequacy is best appraised with reference to features that are intrinsic to the study at hand. Finally, those reviewing papers have a vital role in supporting and encouraging transparent study-specific reporting.

What about N? A methodological study of sample-size reporting in focus group studies

Benedicte Carlsen, Claire Glenton (2011)
Background Focus group studies are increasingly published in health related journals, but we know little about how researchers use this method, particularly how they determine the number of focus groups to conduct. The methodological literature commonly advises researchers to follow principles of data saturation, although practical advise on how to do this is lacking. Our objectives were firstly, to describe the current status of sample size in focus group studies reported in health journals. Secondly, to assess whether and how researchers explain the number of focus groups they carry out. Methods We searched PubMed for studies that had used focus groups and that had been published in open access journals during 2008, and extracted data on the number of focus groups and on any explanation authors gave for this number. We also did a qualitative assessment of the papers with regard to how number of groups was explained and discussed. Results We identified 220 papers published in 117 journals. In these papers insufficient reporting of sample sizes was common. The number of focus groups conducted varied greatly (mean 8.4, median 5, range 1 to 96). Thirty seven (17%) studies attempted to explain the number of groups. Six studies referred to rules of thumb in the literature, three stated that they were unable to organize more groups for practical reasons, while 28 studies stated that they had reached a point of saturation. Among those stating that they had reached a point of saturation, several appeared not to have followed principles from grounded theory where data collection and analysis is an iterative process until saturation is reached. Studies with high numbers of focus groups did not offer explanations for number of groups. Too much data as a study weakness was not an issue discussed in any of the reviewed papers. Conclusions Based on these findings we suggest that journals adopt more stringent requirements for focus group method reporting. The often poor and inconsistent reporting seen in these studies may also reflect the lack of clear, evidence-based guidance about deciding on sample size. More empirical research is needed to develop focus group methodology.

Annabel Nixon, Diane Wild, Cicely Kerr (2010)
In the patient-reported outcomes (PROs) field, strict regulatory requirements must be met for qualitative research that contributes to labeling claims for medicinal products. These requirements not only emphasize the importance of reaching saturation but also of providing documentary evidence that saturation has been reached. This paper reviews qualitative literature for useful definitions of the concept and for practical approaches for assessing saturation. The paper considers approaches in light of the rigorous regulatory requirements for PRO research that are used to support labeling claims for medicinal products and the wider requirements for flexibility and creativity in qualitative research in general. This assessment is facilitated by the use of examples from our past qualitative PRO studies. Based on conclusions from this assessment, we offer preliminary recommendations for future qualitative PRO studies for assessing and documenting saturation.