Pharmacokinetic/Pharmacodynamic Interaction Between Evogliptin and Pioglitazone in Healthy Male Subjects 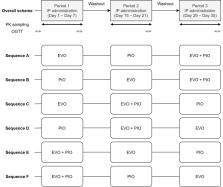 Evogliptin is a newly developed oral glucose-lowering medication of the dipeptidyl peptidase 4 (DPP-4) inhibitor class for type 2 diabetes mellitus. The combination of a DPP-4 inhibitor with pioglitazone is a promising therapeutic option. The aim of the present study was to evaluate the pharmacokinetic and pharmacodynamic interaction between evogliptin and pioglitazone.

Concomitant administration of evogliptin and pioglitazone showed similar glucose-lowering effects with those of evogliptin alone without pharmacokinetic interactions when compared to the intake of each drug alone.

Sylvia Ley,  Yan Zheng,  Frank Hu (2017)
Globally, the number of people with diabetes mellitus has quadrupled in the past three decades, and diabetes mellitus is the ninth major cause of death. About 1 in 11 adults worldwide now have diabetes mellitus, 90% of whom have type 2 diabetes mellitus (T2DM). Asia is a major area of the rapidly emerging T2DM global epidemic, with China and India the top two epicentres. Although genetic predisposition partly determines individual susceptibility to T2DM, an unhealthy diet and a sedentary lifestyle are important drivers of the current global epidemic; early developmental factors (such as intrauterine exposures) also have a role in susceptibility to T2DM later in life. Many cases of T2DM could be prevented with lifestyle changes, including maintaining a healthy body weight, consuming a healthy diet, staying physically active, not smoking and drinking alcohol in moderation. Most patients with T2DM have at least one complication, and cardiovascular complications are the leading cause of morbidity and mortality in these patients. This Review provides an updated view of the global epidemiology of T2DM, as well as dietary, lifestyle and other risk factors for T2DM and its complications.

Management of Hyperglycemia in Type 2 Diabetes, 2018. A Consensus Report by the American Diabetes Association (ADA) and the European Association for the Study of Diabetes (EASD)

Melanie Davies,  David A. D’Alessio,  Judith Fradkin … (2018)
The American Diabetes Association and the European Association for the Study of Diabetes convened a panel to update the prior position statements, published in 2012 and 2015, on the management of type 2 diabetes in adults. A systematic evaluation of the literature since 2014 informed new recommendations. These include additional focus on lifestyle management and diabetes self-management education and support. For those with obesity, efforts targeting weight loss, including lifestyle, medication, and surgical interventions, are recommended. With regards to medication management, for patients with clinical cardiovascular disease, a sodium–glucose cotransporter 2 (SGLT2) inhibitor or a glucagon-like peptide 1 (GLP-1) receptor agonist with proven cardiovascular benefit is recommended. For patients with chronic kidney disease or clinical heart failure and atherosclerotic cardiovascular disease, an SGLT2 inhibitor with proven benefit is recommended. GLP-1 receptor agonists are generally recommended as the first injectable medication.

Kristien Van der Elst,  M Smet,  G Winchell … (2005)
Sitagliptin (MK-0431 [(2R)-4-oxo-4-(3-[trifluoromethyl]-5,6-dihydro[1,2,4]triazolo[4,3-a]pyrazin-7[8H]-yl)-1-(2,4,5-trifluorophenyl)butan-2-amine]) is an orally active, potent, and selective inhibitor of dipeptidyl peptidase IV (DPP-IV) currently in phase III development for the treatment of type 2 diabetes. Two double-blind, randomized, placebo-controlled, alternating-panel studies evaluated the safety, tolerability, pharmacokinetics, and pharmacodynamics of single oral doses of sitagliptin (1.5-600 mg) in healthy male volunteers. Sitagliptin was well absorbed (approximately 80% excreted unchanged in the urine) with an apparent terminal half-life ranging from 8 to 14 hours. Renal clearance of sitagliptin averaged 388 mL/min and was largely uninfluenced by the dose administered. The area under the plasma concentration-time curve for sitagliptin increased in an approximately dose-dependent manner and was not meaningfully influenced by food. Single doses of sitagliptin markedly and dose-dependently inhibited plasma DPP-IV activity, with approximately 80% or greater inhibition of DPP-IV activity occurring at 50 mg or greater over a 12-hour period and at 100 mg or greater over a 24-hour period. Compared with placebo, sitagliptin produced an approximately 2-fold increase in postmeal active glucagon-like peptide 1 levels. Sitagliptin was well tolerated and was not associated with hypoglycemia. This study provides proof of pharmacologic characteristics for sitagliptin in humans. By inhibiting plasma DPP-IV activity, sitagliptin increases the postprandial rise in active glucagon-like peptide 1 concentrations without causing hypoglycemia in normoglycemic healthy male volunteers. Sitagliptin possesses pharmacokinetic and pharmacodynamic characteristics that support a once-daily dosing regimen.