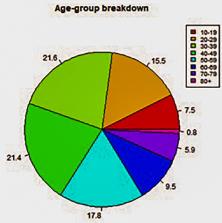 Data visualisation is key to informing data-driven decision-making, yet this is an underexplored area of suicide surveillance. By way of enhancing a real-time suicide surveillance system model, an interactive dashboard prototype has been developed to facilitate emerging cluster detection, risk profiling and trend observation, as well as to establish a formal data sharing connection with key stakeholders via an intuitive interface.

Individual-level demographic and circumstantial data on cases of confirmed suicide and open verdicts meeting the criteria for suicide in County Cork 2008–2017 were analysed to validate the model. The retrospective and prospective space-time scan statistics based on a discrete Poisson model were employed via the R software environment using the “ rsatscan” and “ shiny” packages to conduct the space-time cluster analysis and deliver the mapping and graphic components encompassing the dashboard interface.

Using the best-fit parameters, the retrospective scan statistic returned several emerging non-significant clusters detected during the 10-year period, while the prospective approach demonstrated the predictive ability of the model. The outputs of the investigations are visually displayed using a geographical map of the identified clusters and a timeline of cluster occurrence.

The challenges of designing and implementing visualizations for suspected suicide data are presented through a discussion of the development of the dashboard prototype and the potential it holds for supporting real-time decision-making.

The results demonstrate that integration of a cluster detection approach involving geo-visualisation techniques, space-time scan statistics and predictive modelling would facilitate prospective early detection of emerging clusters, at-risk populations, and locations of concern. The prototype demonstrates real-world applicability as a proactive monitoring tool for timely action in suicide prevention by facilitating informed planning and preparedness to respond to emerging suicide clusters and other concerning trends.

Operational criteria for the determination of suicide.

Brendan D. Murray, J. Smith, H Buzbee … (1988)
Suicide is an important public health problem for which we have an inadequate public health database. In the United States, decisions about whether deaths are listed as suicides on death certificates are usually made by a coroner or medical examiner. These certification decisions are frequently marked by a lack of consistency and clarity, and laws and procedures for guiding these decisions vary from state to state and even from county to county. Without explicit criteria to aid in this decision making, coroners or medical examiners may be more susceptible to pressures from families or communities not to certify specific deaths as suicide. In addition, coroners or medical examiners may certify similar deaths differently at different times. The degree to which suicides may be underreported or misclassified is unknown. This makes it impossible to estimate accurately the number of deaths by suicide, to identify risk factors, or to plan and evaluate preventive interventions. To remedy these problems, a working group representing coroners, medical examiners, statisticians, and public health agencies developed operational criteria to assist in the determination of suicide. These criteria are based on a definition of suicide as "death arising from an act inflicted upon oneself with the intent to kill oneself." The purpose of these criteria is to improve the validity and reliability of suicide statistics by: (1) promoting consistent and uniform classifications; (2) making the criteria for decision making in death certification explicit; (3) increasing the amount of information used in decision making; (4) aiding certifiers in exercising their professional judgment; and (5) establishing common standards of practice for the determination of suicide.

Clustering of suicides in children and adolescents

Keith Hawton, Nicole Hill, Madelyn S Gould … (2019)
Suicide is one of the major causes of death in young people, in whom suicide can occur in clusters. In this Review, we have investigated definitions and epidemiology of such clusters, the factors associated with them, mechanisms by which they occur, and means of intervening and preventing them. Clustering of suicidal behaviour is more common in young people (<25 years) than adults. Suicide clusters can occur as a greater number of episodes than expected at a specific location, including in institutions (eg, schools, universities, psychiatric units, and youth offender units). They might also involve linked episodes spread out geographically. Locations exposed to clusters can be at risk for future clusters. Mechanisms involved in clusters include social transmission (particularly via person-to-person transmission and the media), perception that suicidal behaviour is widespread, susceptible young people being likely to socialise with others at risk of suicidal behaviour, and social cohesion contributing to the diffusion of ideas and attitudes. The internet and social media might have particularly important roles in spreading suicidal behaviour. The effect of suicide clusters on communities and institutions is usually profound. Experience of intervening in clusters has resulted in best practice guidance. This guidance includes preparation for occurrence of clusters in both community and institutional settings. Identification of clusters in the community requires real-time monitoring of suicidal behaviour. Effective intervention is more likely if a cluster response group is established than if no such group exists. The response should include bereavement support, provision of help for susceptible individuals, proactive engagement with media interest, and population-based approaches to support and prevention. Social media can provide a powerful means for disseminating information and reaching young people at risk.

Edited by: Lasse B. Sander, University of Freiburg, Germany

Specialty Section: This article was submitted to Digital Mental Health, a section of the journal Frontiers in Digital Health