Bovine fasciolosis at increasing altitudes: Parasitological and malacological sampling on the slopes of Mount Elgon, Uganda 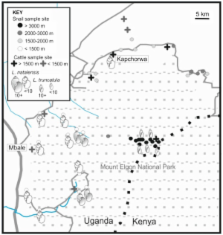 To clarify the extent and putative transmission zone of bovine fasciolosis on the slopes of Mount Elgon, Uganda, conjoint parasitological and malacological surveys, inclusive of inspection of animals at slaughter, were undertaken at increasing altitudes.

A total of 239 cattle were sampled across eight locations ranging in elevation from 1112-2072 m. Faecal material was examined for presence of Fasciola eggs and sera were tested by ELISA for antibodies against Fasciola antigens. Bolstering this, 38 cattle at slaughter from 2 abattoir sites at 1150 m and 1947 m were inspected; in addition, wild buffalo stool (n = 10) opportunistically picked within Mount Elgon National Park (MENP) at 3640 m was examined. By faecal egg detection, prevalence of Fasciola gigantica at low (<1500 m) and high (>1500 m) altitude sites was 43.7% (95% CI 35.4-52.2) and 1.1% (95% CI 0.0-6.0), respectively, while by ELISA was much higher, low altitude - 77.9% (95% CI 69.7-85.4) and high altitude - 64.5% (95% CI 51.3-76.3). The decline in prevalence with increasing altitude was corroborated by abattoir sampling. Thirty seven aquatic habitats, ranging from 1139-3937 m in altitude were inspected for freshwater snails, 12 of which were within MENP. At lower altitudes, Lymnaea (Radix) natalensis was common, and often abundant, but at higher altitudes became much rarer ceasing to be found above 1800 m. On the other hand, Lymnaea (Galba) truncatula was found only at altitudes above 3000 m and within MENP alone. The snail identifications were confirmed by DNA analysis of the ribosomal 18S gene.

Active infections of F. gigantica in cattle are common in lower altitude settings but appear to diminish with increasing elevation. This is likely due to a growing paucity of intermediate hosts, specifically populations of L. natalensis for which a natural boundary of 1800 m appeared. Although F. hepatica was not encountered, the presence of several populations of L. truncatula at elevations over 3000 m point towards a potential transmission zone within MENP should this parasite be introduced.

Relative importance of management, meteorological and environmental factors in the spatial distribution of Fasciola hepatica in dairy cattle in a temperate climate zone.

Qualitative and quantitative evaluation of coprological and serological techniques for the diagnosis of fasciolosis in cattle.

Diana JL Williams,  Edwin Claerebout,  Luc De Raedt … (2008)
The objectives of this study were (1) to evaluate available coprological and serological tests for detection of Fasciola hepatica infection in field conditions, (2) to investigate if the season when samples were collected affects the interpretation of the test results, and (3) to evaluate if the test results are associated with the level of infection. During weekly visits to an abattoir, the whole liver, a rectal faecal sample and a blood sample were collected from 100 cows in two seasons each ("spring"=February-May 2006 and "autumn"=October-December 2006). A sedimentation-flotation technique on 4g (SF 4g) or 10g (SF 10g) of faeces, a copro-antigen ELISA and two indirect serum F. hepatica ELISAs (excretory-secretory (ES) and Pourquier ELISA) were performed and the test results were compared with the presence of infection and worm counts at liver necropsy. Over both seasons the sensitivity (Se) and specificity (Sp) were for the SF 4g 43% and 100%, for the SF 10g 64% and 93%, for the copro-antigen ELISA 94% and 93%, for the ES ELISA 87% and 90% and for the Pourquier ELISA 88% and 84%. Significant between-season differences (P 10 flukes) than that is free of infection or lightly infected (< or = 10 flukes). Weak ( approximately 0.3) and moderate ( approximately 0.6) correlations were observed within infected animals of level of infection with ES and copro-antigen ELISA results, respectively.