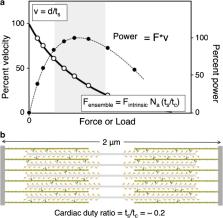 Several lines of evidence suggest that the primary effect of hypertrophic cardiomyopathy mutations in human β-cardiac myosin is hypercontractility of the heart, which leads to subsequent hypertrophy, fibrosis, and myofilament disarray. Here, I describe three perspectives on the molecular basis of this hypercontractility. The first is that hypercontractility results from changes in the fundamental parameters of the actin-activated β-cardiac myosin chemo-mechanical ATPase cycle. The second considers that hypercontractility results from an increase in the number of functionally accessible heads in the sarcomere for interaction with actin. The final and third perspective is that load dependence of contractility is affected by cardiomyopathy mutations and small-molecule effectors in a manner that changes the power output of cardiac contraction. Experimental approaches associated with each perspective are described along with concepts of therapeutic approaches that could prove valuable in treating hypertrophic cardiomyopathy.

Rachel M Holden,  I Rayment,  Wojciech R Rypniewski … (1993)
Directed movement is a characteristic of many living organisms and occurs as a result of the transformation of chemical energy into mechanical energy. Myosin is one of three families of molecular motors that are responsible for cellular motility. The three-dimensional structure of the head portion of myosin, or subfragment-1, which contains both the actin and nucleotide binding sites, is described. This structure of a molecular motor was determined by single crystal x-ray diffraction. The data provide a structural framework for understanding the molecular basis of motility.

Myocardial fibrosis as an early manifestation of hypertrophic cardiomyopathy.

Sheri Hartman,  John Finer,  David Morgans … (2011)
Decreased cardiac contractility is a central feature of systolic heart failure. Existing drugs increase cardiac contractility indirectly through signaling cascades but are limited by their mechanism-related adverse effects. To avoid these limitations, we previously developed omecamtiv mecarbil, a small-molecule, direct activator of cardiac myosin. Here, we show that it binds to the myosin catalytic domain and operates by an allosteric mechanism to increase the transition rate of myosin into the strongly actin-bound force-generating state. Paradoxically, it inhibits adenosine 5'-triphosphate turnover in the absence of actin, which suggests that it stabilizes an actin-bound conformation of myosin. In animal models, omecamtiv mecarbil increases cardiac function by increasing the duration of ejection without changing the rates of contraction. Cardiac myosin activation may provide a new therapeutic approach for systolic heart failure.