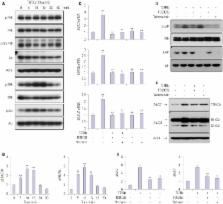 Transforming growth factor-β-induced protein (TGFBIp) is highly expressed in the cornea, and mutant TGFBIp induces corneal diseases. However, the function of TGFBIp in cornea epithelium is not fully investigated. Here, we tested the importance of TGFBIp in regulation of gene expression and corneal epithelial cell (CEC) activity.

The effect of TGFBIp on CEC activity was analyzed by cell migration, adhesion, proliferation and wound healing assay. Analysis of gene expression was examined by western blot and quantitative reverse transcription PCR.

Our findings demonstrate that the locally generated TGFBIp in the cornea may contribute to wound healing of CECs by enhancing the migration, adhesion, and proliferation of CECs. In addition, our results suggest that TGFBIp has a protective effect on ocular surfaces by inducing the expression of mucin genes in corneal and conjunctival epithelial cells. These data suggest that TGFBIp is a useful therapeutic target for patients with corneal wounds.

Stephan Huveneers,  H J Danen (2009)
Interactions between cells and the extracellular matrix coordinate signaling pathways that control various aspects of cellular behavior. Integrins sense the physical properties of the extracellular matrix and organize the cytoskeleton accordingly. In turn, this modulates signaling pathways that are triggered by various other transmembrane receptors and augments the cellular response to growth factors. Over the past years, it has become clear that there is extensive crosstalk between integrins, Src-family kinases and Rho-family GTPases at the heart of such adhesion signaling. In this Commentary, we discuss recent advances in our understanding of the dynamic regulation of the molecular connections between these three protein families. We also discuss how this signaling network can regulate a range of cellular processes that are important for normal tissue function and disease, including cell adhesion, spreading, migration and mechanotransduction.

An SV40-immortalized human corneal epithelial cell line and its characterization.