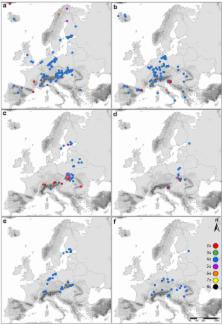 Polyploidy and apomixis are important factors influencing plant distributions often resulting in range shifts, expansions and geographical parthenogenesis. We used the Ranunculus auricomus complex as a model to asses if the past and present distribution and climatic preferences were determined by these phenomena.

Ecological differentiation among diploids and polyploids was tested by comparing the sets of climatic variables and distribution modelling using 191 novel ploidy estimations and 561 literature data. Significant differences in relative genome size on the diploid level were recorded between the “ auricomus” and “ cassubicus” groups and several new diploid occurrences were found in Slovenia and Hungary. The current distribution of diploids overlapped with the modelled paleodistribution (22 kyr BP), except Austria and the Carpathians, which are proposed to be colonized later on from refugia in the Balkans. Current and historical presence of diploids from the R. auricomus complex is suggested also for the foothills of the Caucasus. Based on comparisons of the climatic preferences polyploids from the R. auricomus complex occupy slightly drier and colder habitats than the diploids.

The change of reproductive mode and selection due to competition with the diploid ancestors may have facilitated the establishment of polyploids within the R. auricomus complex in environments slightly cooler and drier, than those tolerated by diploid ancestors. Much broader distribution of polyploid apomicts may have been achieved due to faster colonization mediated by uniparental reproductive system.

Thomas Osborn,  J. Chris Pires,  James Birchler … (2003)
Polyploidy has long been recognized as a prominent force shaping the evolution of eukaryotes, especially flowering plants. New phenotypes often arise with polyploid formation and can contribute to the success of polyploids in nature or their selection for use in agriculture. Although the causes of novel variation in polyploids are not well understood, they could involve changes in gene expression through increased variation in dosage-regulated gene expression, altered regulatory interactions, and rapid genetic and epigenetic changes. New research approaches are being used to study these mechanisms and the results should provide a more complete understanding of polyploidy.

The more the better? The role of polyploidy in facilitating plant invasions.

Christopher D. Richardson,  Jan Suda,  Anneline te Riele … (2011)
Biological invasions are a major ecological and socio-economic problem in many parts of the world. Despite an explosion of research in recent decades, much remains to be understood about why some species become invasive whereas others do not. Recently, polyploidy (whole genome duplication) has been proposed as an important determinant of invasiveness in plants. Genome duplication has played a major role in plant evolution and can drastically alter a plant's genetic make-up, morphology, physiology and ecology within only one or a few generations. This may allow some polyploids to succeed in strongly fluctuating environments and/or effectively colonize new habitats and, thus, increase their potential to be invasive. We synthesize current knowledge on the importance of polyploidy for the invasion (i.e. spread) of introduced plants. We first aim to elucidate general mechanisms that are involved in the success of polyploid plants and translate this to that of plant invaders. Secondly, we provide an overview of ploidal levels in selected invasive alien plants and explain how ploidy might have contributed to their success. Polyploidy can be an important factor in species invasion success through a combination of (1) 'pre-adaptation', whereby polyploid lineages are predisposed to conditions in the new range and, therefore, have higher survival rates and fitness in the earliest establishment phase; and (2) the possibility for subsequent adaptation due to a larger genetic diversity that may assist the 'evolution of invasiveness'. Alternatively, polyploidization may play an important role by (3) restoring sexual reproduction following hybridization or, conversely, (4) asexual reproduction in the absence of suitable mates. We, therefore, encourage invasion biologists to incorporate assessments of ploidy in their studies of invasive alien species.