Reductive metabolism of oxymatrine is catalyzed by microsomal CYP3A4 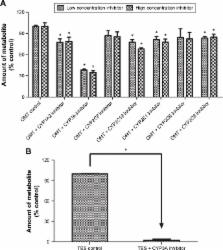 Oxymatrine (OMT) is a pharmacologically active primary quinolizidine alkaloid with various beneficial and toxic effects. It is confirmed that, after oral administration, OMT could be transformed to the more toxic metabolite matrine (MT), and this process may be through the reduction reaction, but the study on the characteristics of this transformation is limited. The aim of this study was to investigate the characteristics of this transformation of OMT in the human liver microsomes (HLMs) and human intestinal microsomes (HIMs) and the cytochrome P450 (CYP) isoforms involved in this transformation. The current studies demonstrated that OMT could be metabolized to MT rapidly in HLMs and HIMs and CYP3A4 greatly contributed to this transformation. All HLMs, HIMs, and CYP3A4 isoform mediated reduction reaction followed typical biphasic kinetic model, and K m, V max, and CL were significant higher in HLMs than those in HIMs. Importantly, different oxygen contents could significantly affect the metabolism of OMT, and with the oxygen content decreased, the formation of metabolite was increased, suggesting this transformation was very likely a reduction reaction. Results of this in vitro study elucidated the metabolic pathways and characteristics of metabolism of OMT to MT and would provide a theoretical basis and guidance for the safe application of OMT.

L. Ma,  Xiaoshan Liu,  Chun-Yan Zhan … (2008)
Matrine is a component of the traditional Chinese medical herb Sophora flavescens Ait, which is widely used to treat diseases such as viral hepatitis, cardiac arrhythmia and skin inflammations. As indicated by previous reports, the molecular mechanism of matrine's anti-cancer effect has been poorly clarified. In this study, we used both in vitro and in vivo models to investigate matrine's antitumor effect and its possible molecular mechanisms. Murine hepatocellular carcinoma H22 cells were cultured in the presence of matrine at various concentrations (0.2 - 2.0 mg/mL). A dose-dependent antiproliferation effect was observed. The 50 % inhibitory concentration (IC (50)) was 0.6 mg/mL. Antiproliferation effects of matrine were associated with an increase in cells arrested in the G (1) phase of the cell cycle. Morphological changes, flow cytometric analysis and expression of the proapoptotic protein Bax indicated that this anticancer effect was mediated via apoptosis. In vivo antitumor efficacy was evaluated following S. C. inoculation of H22 cells in BALB/c mice. Matrine administrated I. P. resulted in strong in vivo anticancer activity. Our results showed that seven doses of matrine at 50 mg/kg/dose inhibited 60.7 % of tumor growth. Transmission electron microscope (TEM) analysis and histoimmunochemical staining for Bcl-2 and Bax proteins also indicated induction of apoptosis in tumor tissues by matrine. Taken together, our results demonstrate that matrine possesses strong antitumor activities in vitro and in vivo. Inhibition of cell proliferation and induction of apoptosis are the likely mechanisms responsible for matrine's antitumor activities.

Effect of St John's wort on drug metabolism by induction of cytochrome P450 3A4 enzyme.

Identification of variants of CYP3A4 and characterization of their abilities to metabolize testosterone and chlorpyrifos.

Hugh Rose,  J. Goldstein,  R J Bienstock … (2001)
CYP3A4 is the most abundant isoform of cytochrome P450 (CYP) in adult human liver. It metabolizes numerous clinically, physiologically, and toxicologically important compounds. The expression of CYP3A4 varies 40-fold in individual human livers, and metabolism of CYP3A4 substrates varies at least 10-fold in vivo. Single nucleotide polymorphisms (SNPs) in CYP3A4 were identified by direct sequencing of genomic DNA in 72 individuals from three different ethnic groups, including Caucasians, Blacks (African-Americans and African pygmies), and Asians. A total of 28 SNPs were identified, including five which produced coding changes M445T (CYP3A4*3), R162Q (CYP3A4*15), F189S (CYP3A4*17), L293P (CYP3A4*18), and P467S (CYP3A4*19). The latter four represent new alleic variants. Racial variability was observed for the frequency of individual SNPs. CYP3A R162Q was identified only in Black populations with an allelic frequency of 4%. CYP3A4 F189S and CYP3A4 M445T were identified in Caucasians with allelic frequencies 2% and 4%, respectively. L293P and P467S were only observed in Asians at allelic frequencies of 2%. The cDNAs for the F189S, L293P, M445T, and P467S mutant alleles were constructed by site-directed mutagenesis and expressed in an Escherichia coli expression system. Testosterone and the insecticide chlorpyrifos were used to assess the catalytic activities of the most common CYP3A4 allele (CYP3A4*1) and its allelic variants. CYP3A4 F189S exhibited lower turnover numbers for testosterone and chlorpyrifos, while CYP3A4 L293P had higher turnover numbers for both substrates. The turnover numbers of the CYP3A4 M445T and P467S alleles to metabolize these compounds were not significantly different from those of wild-type CYP3A4.