Misdiagnosed recurrent multiple Kimura's disease: A case report and review of the literature 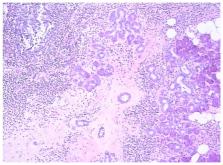 Kimura's disease (KD) is a rare condition, with only a few cases reported to date, mainly in Asian patients. We herein present the case of a 48-year-old man with KD who presented with recurrent masses in the right parotid gland and neck region over a 15-year period. The masses were not accompanied by pain, or significant functional or neurosensory dysfunction. The results of the laboratory tests revealed an increased eosinophil count and markedly elevated serum IgE levels. On magnetic resonance imaging examination, a widespread abnormal signal was detected in the area of the lesions; the contrast-enhanced scan revealed inhomogeneous enhancement, with partial involvement of the sternocleidomastoid muscle and the parotid gland. The patient underwent surgical resection of the right parotid and neck masses, and the postoperative pathological examination revealed eosinophilic hyperplastic lymphogranuloma, also referred to as KD. This presented case and review of the relevant literature aim to improve our understanding of KD in order to increase the accuracy of diagnosis, reduce the misdiagnosis rate and ensure proper treatment of this rare disease.

Nadine S Ives Aguilera,  S L Abbondanzo,  Hong Chen … (2004)
Kimura disease is a rare form of chronic inflammatory disorder involving subcutaneous tissue, predominantly in the head and neck region and frequently associated with regional lymphadenopathy and/or salivary gland involvement. This condition has a predilection for males of Asian descent and may clinically simulate a neoplasm. Kimura disease is sometimes confused with angiolymphoid hyperplasia with eosinophilia, which occurs in the superficial skin of the head and neck region. Although sporadic cases have been reported in non-Asians, there is no large, comprehensive study of Kimura disease in the United States. We report 21 cases with nodal involvement that, histologically, are consistent with Kimura disease. There were 18 males and 3 females (male/female ratio 6:1), 8 to 64 years of age (mean, 32 years), and included 7 Caucasians, 6 Blacks, 6 Asians, 1 Hispanic, and 1 Arabic. Anatomic sites of involvement included posterior auricular (n = 10), cervical (n = 6), inguinal (n = 3), and epitrochlear (n = 2) lymph nodes, with two patients having associated salivary gland involvement. Most (n = 16) cases had peripheral blood eosinophilia. Consistent histologic features were follicular hyperplasia, eosinophilic infiltrates, and proliferation of postcapillary venules. Follow-up data on 18 patients revealed that 13 were alive without disease (3 had recurrence), mean follow-up, 10.9 years; 4 were alive with disease (2 had a recurrence), mean follow-up, 8.8 years; and 1 died with disease (12.7 years). Kimura disease has been described more often in Asians, but it does occur in non-Asians with a similar clinicopathologic presentation. It is a distinctive entity with no known etiology. Kimura disease has characteristic histologic features that are important to recognize and can be used to differentiate it from hypersensitivity and drug reactions and infections.

D Rajpoot,  Steven E. Clark,  Donna Pahl (2000)
Kimura disease presents as benign subcutaneous swelling predominantly around the head and neck region. It has a high incidence of renal involvement. However, the pathogenesis of this association remains elusive. Only 2 pediatric cases and 11 adult cases of Kimura disease with renal involvement have been reported in the literature. In recent years many immunopathogenetic features suggesting an underlying T-cell and related cytokine defect have been noted in Kimura disease. We describe a unique case of an Asian boy who presented with nephrotic syndrome resistant to steroid and cytotoxic therapy, and 5 years later developed cervical lymphadenopathy consistent with Kimura disease. We also review the literature, summarizing the presentation, differential diagnosis, incidence of renal disease, prognosis, immunopathogenetic features, and therapy.

Kimura disease: review of the literature.

S-C Pan,  D. Xu,  C Miao … (2008)
Kimura disease (KD) is a rare, chronic inflammatory disease of unknown cause and is characterized by painless s.c. swellings and lymphadenopathy commonly affecting the head and neck region. Much therapeutics has been used to treat KD, but is not satisfactory because of frequent relapse. Imatinib has been reported previously to be useful for treatment of hypereosinophilic syndrome and may work by selectively blocking protein-tyrosine kinases, such as platelet-derived growth factor receptor, and c-Kit. We carried out immunohistochemical examination of platelet-derived growth factor receptor-alpha and c-Kit in tissues from patients with KD. The results were positive and suggested that Imatinib might be an effective drug for the treatment of the disease. We have also briefly reviewed the epidemiology, aetiology, clinical manifestations, laboratory and pathological examinations, differential diagnoses, treatment and prognosis of KD in this manuscript.