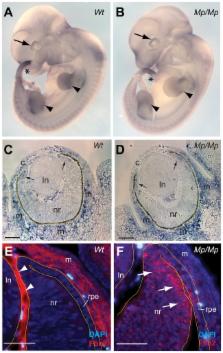 Mp is an irradiation-induced mouse mutation associated with microphthalmia, micropinna and hind limb syndactyly. We show that Mp is caused by a 660 kb balanced inversion on chromosome 18 producing reciprocal 3-prime gene fusion events involving Fbn2 and Isoc1. The Isoc1-Fbn2 fusion gene ( Isoc1 Mp ) mRNA has a frameshift and early stop codon resulting in nonsense mediated decay. Homozygous deletions of Isoc1 do not support a significant developmental role for this gene. The Fbn2-Isoc1 fusion gene ( Fbn2 Mp) predicted protein consists of the N-terminal Fibrillin-2 (amino acids 1–2646, exons 1–62) lacking the C-terminal furin-cleavage site with a short out-of-frame extension encoded by the final exon of Isoc1. The Mp limb phenotype is consistent with that reported in Fbn2 null embryos. However, severe eye malformations, a defining feature of Mp, are not seen in Fbn2 null animals. Fibrillin-2 Mp forms large fibrillar structures within the rough endoplasmic reticulum (rER) associated with an unfolded protein response and quantitative mass spectrometry shows a generalised defect in protein secretion in conditioned media from mutant cells. In the embryonic eye Fbn2 is expressed within the peripheral ciliary margin (CM). Mp embryos show reduced canonical Wnt-signalling in the CM – known to be essential for ciliary body development - and show subsequent aplasia of CM-derived structures. We propose that the Mp “worse-than-null” eye phenotype plausibly results from a failure in normal trafficking of proteins that are co-expressed with Fbn2 within the CM. The prediction of similar trans-acting protein effects will be an important challenge in the medical interpretation of human mutations from whole exome sequencing.

With the current increase in large-scale sequencing efforts, correct interpretation of mutation consequences has never been more important. Here, we present evidence for a trans-acting protein effect in a novel mutation of Fbn2, associated with severe developmental eye defects not found in loss of function Fibrillin-2 alleles. The mutant protein is expressed in the developing eye but is unable to exit the cells, instead forming large protein aggregates within the endoplasmic reticulum. We observed ER-stress in mutant eyes, and detected a general reduction to secretion of co-expressed proteins in cell cultures. We propose that similar effects could be caused by mutations to other proteins that are trafficked through the ER, highlighting a disease mechanism that results in different clinical outcomes than observed, or predicted, from loss-off-function alleles.

Miles Wilkinson,  Tzu-Yao Chang,  J. Imam (2006)
Nonsense-mediated mRNA decay (NMD) is a quality-control mechanism that selectively degrades mRNAs harboring premature termination (nonsense) codons. If translated, these mRNAs can produce truncated proteins with dominant-negative or deleterious gain-of-function activities. In this review, we describe the molecular mechanism of NMD. We first cover conserved factors known to be involved in NMD in all eukaryotes. We then describe a unique protein complex that is deposited on mammalian mRNAs during splicing, which defines a stop codon as premature. Interaction between this exon-junction complex (EJC) and NMD factors assembled at the upstream stop codon triggers a series of steps that ultimately lead to mRNA decay. We discuss whether these proofreading events preferentially occur during a "pioneer" round of translation in higher and lower eukaryotes, their cellular location, and whether they can use alternative EJC factors or act independent of the EJC.

Mapping Wnt/beta-catenin signaling during mouse development and in colorectal tumors.

M Cordenonsi,  Joris Bressan,  Dino Volpin … (2003)
Wntbeta-catenin signaling plays key roles in several developmental and pathological processes. Domains of Wnt expression have been extensively investigated in the mouse, but the tissues receiving the signal remain largely unidentified. To define which cells respond to activated beta-catenin during mammalian development, we generated the beta-catenin-activated transgene driving expression of nuclear beta-galactosidase reporter (BAT-gal) transgenic mice, expressing the lacZ gene under the control of beta-cateninT cell factor responsive elements. Reporter gene activity is found in known organizing centers, such as the midhindbrain border and the limb apical ectodermal ridge. Moreover, BAT-gal expression identifies novel sites of Wnt signaling, like notochord, endothelia, and areas of the adult brain, revealing an unsuspected dynamic pattern of beta-catenin transcriptional activity. Expression of the transgene was analyzed in mutant backgrounds. In lipoprotein receptor-related protein 6-null homozygous mice, which lack a Wnt coreceptor, BAT-gal staining is absent in mutant tissues, indicating that BAT-gal mice are bona fide in vivo indicators of Wntbeta-catenin signaling. Analyses of BAT-gal expression in the adenomatous polyposis coli (multiple intestinal neoplasia+) background revealed betacatenin transcriptional activity in intestinal adenomas but surprisingly not in normal crypt cells. In summary, BAT-gal mice unveil the entire complexity of Wntbeta-catenin signaling in mammals and have broad application potentials for the identification of Wnt-responsive cell populations in development and disease.

J Favor,  Kendra R Maas,  Sherrye Glaser … (1994)
The human eye malformation aniridia results from haploinsufficiency of PAX6, a paired box DNA-binding protein. To study this dosage effect, we characterized two PAX6 mutations in a family segregating aniridia and a milder syndrome consisting of congenital cataracts and late onset corneal dystrophy. The nonsense mutations, at codons 103 and 353, truncate PAX6 within the N-terminal paired and C-terminal PST domains, respectively. The wild-type PST domain activates transcription autonomously and the mutant form has partial activity. A compound heterozygote had severe craniofacial and central nervous system defects and no eyes. The pattern of malformations is similar to that in homozygous Sey mice and suggests a critical role for PAX6 in controlling the migration and differentiation of specific neuronal progenitor cells in the brain.

Funding for this project was provided as an intramural program grant from the Medical Research Council (UK). The funders had no role in study design, data collection and analysis, decision to publish, or preparation of the manuscript.