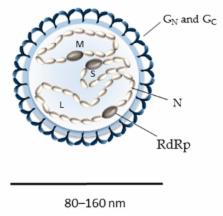 The Bunyaviridae is the largest family of RNA viruses, with over 350 members worldwide. Several of these viruses cause severe diseases in livestock and humans. With an increasing number and frequency of outbreaks, bunyaviruses represent a growing threat to public health and agricultural productivity globally. Yet, the receptors, cellular factors and endocytic pathways used by these emerging pathogens to infect cells remain largely uncharacterized. The focus of this review is on the early steps of bunyavirus infection, from virus binding to penetration from endosomes. We address current knowledge and advances for members from each genus in the Bunyaviridae family regarding virus receptors, uptake, intracellular trafficking and fusion.

Stephen C. Harrison (2015)
Membrane fusion is an essential step when enveloped viruses enter cells. Lipid bilayer fusion requires catalysis to overcome a high kinetic barrier; viral fusion proteins are the agents that fulfill this catalytic function. Despite a variety of molecular architectures, these proteins facilitate fusion by essentially the same generic mechanism. Stimulated by a signal associated with arrival at the cell to be infected (e.g., receptor or co-receptor binding, proton binding in an endosome), they undergo a series of conformational changes. A hydrophobic segment (a "fusion loop" or "fusion peptide") engages the target-cell membrane and collapse of the bridging intermediate thus formed draws the two membranes (virus and cell) together. We know of three structural classes for viral fusion proteins. Structures for both pre- and postfusion conformations of illustrate the beginning and end points of a process that can be probed by single-virion measurements of fusion kinetics.

Jeffrey Bergelson,  Carolyn Coyne (2006)
Group B coxsackieviruses (CVBs) must cross the epithelium as they initiate infection, but the mechanism by which this occurs remains uncertain. The coxsackievirus and adenovirus receptor (CAR) is a component of the tight junction and is inaccessible to virus approaching from the apical surface. Many CVBs also interact with the GPI-anchored protein decay-accelerating factor (DAF). Here, we report that virus attachment to DAF on the apical cell surface activates Abl kinase, triggering Rac-dependent actin rearrangements that permit virus movement to the tight junction. Within the junction, interaction with CAR promotes conformational changes in the virus capsid that are essential for virus entry and release of viral RNA. Interaction with DAF also activates Fyn kinase, an event that is required for the phosphorylation of caveolin and transport of virus into the cell within caveolar vesicles. CVBs thus exploit DAF-mediated signaling pathways to surmount the epithelial barrier.