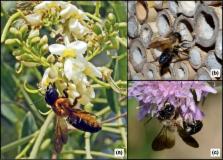 In 2008, a new species for the French bee fauna was recorded in Allauch near Marseille: the giant resin bee, Megachile sculpturalis (Smith, 1853). This was the first European record of this species that is native to East Asia. To our knowledge, it is the first introduced bee species in Europe. Here, we provide an overview of the current distribution of M. sculpturalis in France and we describe the history of its range expansion. Besides our own observations, information was compiled from literature and Internet websites, and by contacting naturalist networks. We collected a total of 117 records ( locality ×  year combinations) for the 2008–2016 period. The geographical range of M. sculpturalis has extended remarkably, now occupying a third of continental France, with the most northern and western records located 335 and 520 km from Allauch, respectively. Information on its phenology, feeding, and nesting behavior is also provided. We report several events of nest occupation or eviction of Osmia sp. and Xylocopa sp. individuals by M. sculpturalis. Our results show that M. sculpturalis is now well established in France. Given its capacity to adapt and rapidly expand its range, we recommend amplifying the monitoring of this species to better anticipate the changes in its geographical range and its potential impacts on native bees.

I. Bartomeus,  J. Ascher,  J. Gibbs … (2013)
Pollinators such as bees are essential to the functioning of terrestrial ecosystems. However, despite concerns about a global pollinator crisis, long-term data on the status of bee species are limited. We present a long-term study of relative rates of change for an entire regional bee fauna in the northeastern United States, based on >30,000 museum records representing 438 species. Over a 140-y period, aggregate native species richness weakly decreased, but richness declines were significant only for the genus Bombus. Of 187 native species analyzed individually, only three declined steeply, all of these in the genus Bombus. However, there were large shifts in community composition, as indicated by 56% of species showing significant changes in relative abundance over time. Traits associated with a declining relative abundance include small dietary and phenological breadth and large body size. In addition, species with lower latitudinal range boundaries are increasing in relative abundance, a finding that may represent a response to climate change. We show that despite marked increases in human population density and large changes in anthropogenic land use, aggregate native species richness declines were modest outside of the genus Bombus. At the same time, we find that certain ecological traits are associated with declines in relative abundance. These results should help target conservation efforts focused on maintaining native bee abundance and diversity and therefore the important ecosystems services that they provide.

Rajwinder Singh,  Abby Levitt,  Edwin Rajotte … (2011)
Although overall pollinator populations have declined over the last couple of decades, the honey bee (Apis mellifera) malady, colony collapse disorder (CCD), has caused major concern in the agricultural community. Among honey bee pathogens, RNA viruses are emerging as a serious threat and are suspected as major contributors to CCD. Recent detection of these viral species in bumble bees suggests a possible wider environmental spread of these viruses with potential broader impact. It is therefore vital to study the ecology and epidemiology of these viruses in the hymenopteran pollinator community as a whole. We studied the viral distribution in honey bees, in their pollen loads, and in other non-Apis hymenopteran pollinators collected from flowering plants in Pennsylvania, New York, and Illinois in the United States. Viruses in the samples were detected using reverse transcriptase-PCR and confirmed by sequencing. For the first time, we report the molecular detection of picorna-like RNA viruses (deformed wing virus, sacbrood virus and black queen cell virus) in pollen pellets collected directly from forager bees. Pollen pellets from several uninfected forager bees were detected with virus, indicating that pollen itself may harbor viruses. The viruses in the pollen and honey stored in the hive were demonstrated to be infective, with the queen becoming infected and laying infected eggs after these virus-contaminated foods were given to virus-free colonies. These viruses were detected in eleven other non-Apis hymenopteran species, ranging from many solitary bees to bumble bees and wasps. This finding further expands the viral host range and implies a possible deeper impact on the health of our ecosystem. Phylogenetic analyses support that these viruses are disseminating freely among the pollinators via the flower pollen itself. Notably, in cases where honey bee apiaries affected by CCD harbored honey bees with Israeli Acute Paralysis virus (IAPV), nearby non-Apis hymenopteran pollinators also had IAPV, while those near apiaries without IAPV did not. In containment greenhouse experiments, IAPV moved from infected honey bees to bumble bees and from infected bumble bees to honey bees within a week, demonstrating that the viruses could be transmitted from one species to another. This study adds to our present understanding of virus epidemiology and may help explain bee disease patterns and pollinator population decline in general.