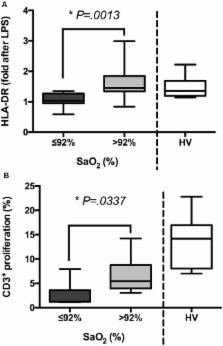 Sepsis is a pathology in which patients suffer from a proinflammatory response and a dysregulated immune response, including T cell exhaustion. A number of therapeutic strategies to treat human sepsis, which are different from antimicrobial and fluid resuscitation treatments, have failed in clinical trials, and solid biomarkers for sepsis are still lacking. Herein, we classified 85 patients with sepsis into two groups according to their blood oxygen saturation (SaO 2): group I (SaO 2 ≤ 92%, n = 42) and group II (SaO 2 > 92%, n = 43). Blood samples were taken before any treatment, and the immune response after ex vivo LPS challenge was analyzed, as well as basal expression of PD-L1 on monocytes and levels of sPD-L1 in sera. The patients were followed up for 1 month. Taking into account reinfection and exitus frequency, a significantly poorer evolution was observed in patients from group I. The analysis of HLA-DR expression on monocytes, T cell proliferation and cytokine profile after ex vivo LPS stimulation confirmed an impaired immune response in group I. In addition, these patients showed both, high levels of PD-L1 on monocytes and sPD-L1 in serum, resulting in a down-regulation of the adaptive response. A blocking assay using an anti-PD-1 antibody reverted the impaired response. Our data indicated that SaO 2 levels on admission have emerged as a potential signature for immune status, including PD-L1 expression. An anti-PD-1 therapy could restore the T cell response in hypoxemic sepsis patients with SaO 2 ≤ 92% and high PD-L1 levels.

The sepsis seesaw: tilting toward immunosuppression.

Gordon Otto,  Maik Sossdorf,  Ralf A. Claus … (2011)
Introduction Recent models capturing the pathophysiology of sepsis and ex-vivo data from patients are speculating about immunosuppression in the so-called late phase of sepsis. Clinical data regarding survival and microbiological burden are missing. The aim of this study was to determine the clinical significance of the 'late phase' of sepsis with respect to overall survival and occurrence of microbiological findings. Methods In a retrospective trial, 16,041 patient charts from a university intensive care unit were screened, and 999 patients with severe sepsis or septic shock were identified. Three phases were established according to the mortality peaks which were separated by two distinct nadirs: phase I (days 1 to 5), phase II (days 6 to 15) and phase III (days 16 to 150). Patients were analyzed for outcome, SOFA scores, procalcitonin levels, antimicrobial treatment, dialysis, mechanical ventilation and results of blood cultures during their hospital stay. Results Out of 999 enrolled patients, 308 died during the course of sepsis presenting a characteristic mortality rate (30.8%) with three distinct mortality peaks (at days 2, 7 and 17). Overall 36.7% of all deaths occurred in the early phase (phase I) and 63.3% during the later phases (phase II + III). In total 2,117 blood cultures were drawn. In phase I, 882 blood cultures were drawn, representing a sampling rate of 88% with a positive rate of 14.9%. In phase II, 461 samples were taken, indicating a sampling rate of 52% and a positive rate of 11.3%. Within phase III, 524 samples were obtained representing a sampling rate of 66% with a positive rate of 15.3%, which was significantly higher compared to the positive rate of phase II and similar to phase I. In particular, the rate of typically opportunistic bacteria increased significantly from 9% in phase I up to 18% in phase III. The same is true for Candida spp. (phase I 13%, phase III 30%). Conclusions The later phase of sepsis is associated with a significant re-increase of positive blood culture results, especially regarding opportunistic bacteria and fungi. These observations warrant further studies focusing on the underlying mechanisms resulting in this outcome burden in the later phase of sepsis.