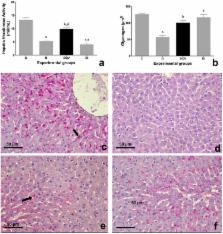 Omer Coskun,  Mehmet Kanter,  Ahmet Korkmaz … (2005)
The aim of the present study was the evaluation of possible protective effects of quercetin (QE) against beta-cell damage in experimental streptozotocin (STZ)-induced diabetes in rats. STZ was injected intraperitoneally at a single dose of 50 mg kg(-1) for diabetes induction. QE (15 mg kg(-1) day, intraperitoneal (i.p.) injection) was injected for 3 days prior to STZ administration; these injections were continued to the end of the study (for 4 weeks). It has been believed that oxidative stress plays a role in the pathogenesis of diabetes mellitus (DM). In order to determine the changes of cellular antioxidant defense system, antioxidant enzymes such as glutathione peroxidase (GSHPx), superoxide dismutase (SOD) and catalase (CAT) activities were measured in pancreatic homogenates. Moreover we also measured serum nitric oxide (NO) and erythrocyte and pancreatic tissue malondialdehyde (MDA) levels, a marker of lipid peroxidation, if there is an imbalance between oxidant and antioxidant status. Pancreatic beta-cells were examined by immunohistochemical methods. STZ induced a significant increase lipid peroxidation, serum NO concentrations and decreased the antioxidant enzyme activity. Erythrocyte MDA, serum NO and pancreatic tissue MDA significantly increased (P < 0.05) and also the antioxidant levels significantly decreased (P < 0.05) in diabetic group. QE treatment significantly decreased the elevated MDA and NO (P < 0.05), and also increased the antioxidant enzyme activities (P < 0.05). QE treatment has shown protective effect possibly through decreasing lipid peroxidation, NO production and increasing antioxidant enzyme activity. Islet cells degeneration and weak insulin immunohistochemical staining was observed in STZ induced diabetic rats. Increased staining of insulin and preservation of islet cells were apparent in the QE-treated diabetic rats. These findings suggest that QE treatment has protective effect in diabetes by decreasing oxidative stress and preservation of pancreatic beta-cell integrity.

Jicheng Yu,  Yuqi Zhang,  Yanqi Ye … (2015)
A glucose-responsive "closed-loop" insulin delivery system mimicking the function of pancreatic cells has tremendous potential to improve quality of life and health in diabetics. Here, we report a novel glucose-responsive insulin delivery device using a painless microneedle-array patch ("smart insulin patch") containing glucose-responsive vesicles (GRVs; with an average diameter of 118 nm), which are loaded with insulin and glucose oxidase (GOx) enzyme. The GRVs are self-assembled from hypoxia-sensitive hyaluronic acid (HS-HA) conjugated with 2-nitroimidazole (NI), a hydrophobic component that can be converted to hydrophilic 2-aminoimidazoles through bioreduction under hypoxic conditions. The local hypoxic microenvironment caused by the enzymatic oxidation of glucose in the hyperglycemic state promotes the reduction of HS-HA, which rapidly triggers the dissociation of vesicles and subsequent release of insulin. The smart insulin patch effectively regulated the blood glucose in a mouse model of chemically induced type 1 diabetes. The described work is the first demonstration, to our knowledge, of a synthetic glucose-responsive device using a hypoxia trigger for regulation of insulin release. The faster responsiveness of this approach holds promise in avoiding hyperglycemia and hypoglycemia if translated for human therapy.

M. Nauck (2016)
Over the last few years, incretin‐based therapies have emerged as important agents in the treatment of type 2 diabetes (T2D). These agents exert their effect via the incretin system, specifically targeting the receptor for the incretin hormone glucagon‐like peptide 1 (GLP‐1), which is partly responsible for augmenting glucose‐dependent insulin secretion in response to nutrient intake (the ‘incretin effect’). In patients with T2D, pharmacological doses/concentrations of GLP‐1 can compensate for the inability of diabetic β cells to respond to the main incretin hormone glucose‐dependent insulinotropic polypeptide, and this is therefore a suitable parent compound for incretin‐based glucose‐lowering medications. Two classes of incretin‐based therapies are available: GLP‐1 receptor agonists (GLP‐1RAs) and dipeptidyl peptidase‐4 (DPP‐4) inhibitors. GLP‐1RAs promote GLP‐1 receptor (GLP‐1R) signalling by providing GLP‐1R stimulation through ‘incretin mimetics’ circulating at pharmacological concentrations, whereas DPP‐4 inhibitors prevent the degradation of endogenously released GLP‐1. Both agents produce reductions in plasma glucose and, as a result of their glucose‐dependent mode of action, this is associated with low rates of hypoglycaemia; however, there are distinct modes of action resulting in differing efficacy and tolerability profiles. Furthermore, as their actions are not restricted to stimulating insulin secretion, these agents have also been associated with additional non‐glycaemic benefits such as weight loss, improvements in β‐cell function and cardiovascular risk markers. These attributes have made incretin therapies attractive treatments for the management of T2D and have presented physicians with an opportunity to tailor treatment plans. This review endeavours to outline the commonalities and differences among incretin‐based therapies and to provide guidance regarding agents most suitable for treating T2D in individual patients.