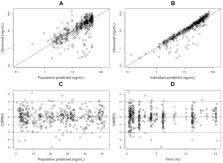 The main aim of this analysis was to characterize the pharmacokinetics (PK) of the strong analgesic tapentadol in 2-year-old to <18-year-old patients with acute pain and to inform the optimal dosing strategy for a confirmatory efficacy trial in this patient population.

Tapentadol PK in children aged from 2 to <18 years was best described by a one-compartment model. Mean population apparent clearance and apparent volume of distribution for a typical subject weighing 45 kg were 170 L/h and 685 L, respectively. Clearance, expressed in bodyweight units as L/h/kg, decreased with increasing age whereas total clearance (L/h) increased with increasing age. Model-based simulations suggested that a tapentadol OS dose of 1.25 mg/kg to children and adolescents aged 2 to <18 years would result in efficacious tapentadol exposures similar to those in adults receiving tapentadol immediate release 50–100 mg every 4 hrs. The proposed tapentadol OS dose was subsequently applied in a confirmatory efficacy trial in 2 to <18-year-old patients suffering from acute postsurgical pain.

This analysis provides an example of a model-based approach for a dose recommendation to be used in an efficacy trial in the pediatric population. Uniform dosing based on bodyweight was proposed for the treatment of acute pain in children aged from 2 to <18 years.

Pain and its effects in the human neonate and fetus.

Impact of pharmacometric analyses on new drug approval and labelling decisions: a review of 198 submissions between 2000 and 2008.

The changing balance of brainstem-spinal cord modulation of pain processing over the first weeks of rat postnatal life.

Maria Fitzgerald,  Michael S. Koch,  E Low … (2009)
Brainstem-spinal cord connections play an essential role in adult pain processing, and the modulation of spinal pain network excitability by brainstem nuclei is known to contribute to hyperalgesia and chronic pain. Less well understood is the role of descending brainstem pathways in young animals when pain networks are more excitable and exposure to injury and stress can lead to permanent modulation of pain processing. Here we show that up to postnatal day 21 (P21) in the rat, the rostroventral medulla of the brainstem (RVM) exclusively facilitates spinal pain transmission but that after this age (P28 to adult), the influence of the RVM shifts to biphasic facilitation and inhibition. Graded electrical microstimulation of the RVM at different postnatal ages revealed a robust shift in the balance of descending control of both spinal nociceptive flexion reflex EMG activity and individual dorsal horn neuron firing properties, from excitation to inhibition, beginning after P21. The shift in polarity of descending control was also observed following excitotoxic lesions of the RVM in adult and P21 rats. In adults, RVM lesions decreased behavioural mechanical sensory reflex thresholds, whereas the same lesion in P21 rats increased thresholds. These data demonstrate, for the first time, the changing postnatal influence of the RVM in spinal nociception and highlight the central role of descending brainstem control in the maturation of pain processing.