The global and regional prevalence of oestrosis in sheep and goats: a systematic review of articles and meta-analysis 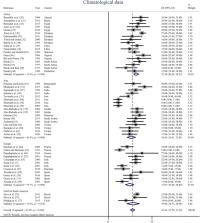 Oestrosis, caused by the larvae of Oestrus ovis, commonly known as sheep nose bot, is an obligatory cavitary myiasis of sheep and goats. Oestrus ovis is a widespread parasite, but little is known about the prevalence of oestrosis at the global and broad geographical levels. The present study aimed to explore the epidemiology of oestrosis at the global and regional level to estimate prevalences and their associated factors using a systematic approach. This is, to the author’s knowledge, the first meta-analysis of oestrosis in sheep and goats.

Oestrosis is highly prevalent in many geographical regions of the world, especially in Europe and Africa. Factors that contribute to the pooled prevalence estimate of oestrosis need to be emphasised in any survey to estimate the true prevalence of oestrosis. Furthermore, there is a need for immunisation or implementation of other preventive measures to reduce the burden of oestrosis in sheep and goats and to improve the health and welfare status.

Regional Variation in the Prevalence of E. coli O157 in Cattle: A Meta-Analysis and Meta-Regression

Md Zohorul Islam,  Alfred Musekiwa,  Kamrul Islam … (2014)
Background Escherichia coli O157 (EcO157) infection has been recognized as an important global public health concern. But information on the prevalence of EcO157 in cattle at the global and at the wider geographical levels is limited, if not absent. This is the first meta-analysis to investigate the point prevalence of EcO157 in cattle at the global level and to explore the factors contributing to variation in prevalence estimates. Methods Seven electronic databases- CAB Abstracts, PubMed, Biosis Citation Index, Medline, Web of Knowledge, Scirus and Scopus were searched for relevant publications from 1980 to 2012. A random effect meta-analysis model was used to produce the pooled estimates. The potential sources of between study heterogeneity were identified using meta-regression. Principal findings A total of 140 studies consisting 220,427 cattle were included in the meta-analysis. The prevalence estimate of EcO157 in cattle at the global level was 5.68% (95% CI, 5.16–6.20). The random effects pooled prevalence estimates in Africa, Northern America, Oceania, Europe, Asia and Latin America-Caribbean were 31.20% (95% CI, 12.35–50.04), 7.35% (95% CI, 6.44–8.26), 6.85% (95% CI, 2.41–11.29), 5.15% (95% CI, 4.21–6.09), 4.69% (95% CI, 3.05–6.33) and 1.65% (95% CI, 0.77–2.53), respectively. Between studies heterogeneity was evidenced in most regions. World region (p<0.001), type of cattle (p<0.001) and to some extent, specimens (p = 0.074) as well as method of pre-enrichment (p = 0.110), were identified as factors for variation in the prevalence estimates of EcO157 in cattle. Conclusion The prevalence of the organism seems to be higher in the African and Northern American regions. The important factors that might have influence in the estimates of EcO157 are type of cattle and kind of screening specimen. Their roles need to be determined and they should be properly handled in any survey to estimate the true prevalence of EcO157.

Pathophysiology of Oestrus ovis infection in sheep and goats: a review.

P Dorchies,  C Duranton,  P. Jacquiet (1998)
Oestrus ovis is a very common parasite of sheep and goats in many countries. Its pathological effects are often underestimated because owners and veterinarians are used to seeing the infection. The study of natural and experimental infections has provided information about the evolution of the disease and its pathophysiology. Hypersensitivity is involved; the numbers of mast cells and eosinophils increase but changes in IgE have only recently been examined. Little is known about the development of immunity but it is possible that some animals are immunodeficient.

An outbreak of human external ophthalmomyiasis due to Oestrus ovis in southern Afghanistan.

Kerry Woods,  James Dunbar,  Jeremy S. Whelan … (2008)
Oestrus ovis is the most common cause of human ophthalmomyiasis, and infection is often misdiagnosed as acute conjunctivitis. Although it typically occurs in shepherds and farmers, O. ovis ophthalmomyiasis has also been reported in urban areas. We report the first case study of O. ovis infection from Afghanistan.