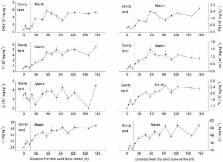 The development of sandification process was studied, by monitoring the changes of sediment characteristics, at marsh-sandy land intersections in China's Songnen region. A series of sediment collection plates were deployed in the region; after one year, sediments in these plates were analyzed for changes of mass and chemical characteristics. The sediment flux and the sand content of the sediments decreased with the increasing longitudinal distance between the sampling site and the centre line of a sand dune. The mean sediment flux was 29±14 kg m −2 yr −1 and 0.6±0.3 kg m −2 yr −1 in the sandy land and marsh, respectively. Strong, positive correlations were found between the concentrations of organic matter, total nitrogen, P, Fe, Ti, V and Zr, all of which were also negatively correlated with the sand content. The concentrations of organic matter, total nitrogen, P, Fe, Ti, V and Zr in the marsh sediment samples were all significantly greater than the corresponding concentrations of the sandy land ( p<0.001). Sand content and Ti, V and Zr concentrations all proved to be valid indicators of sandification intensity, and they showed that the marsh could be divided into three distinct zones. Sand expansion extended about 88 m into the marsh. The mean sand content in the sediments of the sandy land was 91% and then 64% in the marsh, which in turn was higher than that of marshes outside the influence of sandification, suggesting that the marsh in the marsh-sandy land transitional area has already undergone extensive sandification in the past. The study results provide information on the wetland's function of indicating and buffering the sandification process.

Umberto Lombardo,  Katherine Szabo,  José M Capriles … (2013)
We report on previously unknown early archaeological sites in the Bolivian lowlands, demonstrating for the first time early and middle Holocene human presence in western Amazonia. Multidisciplinary research in forest islands situated in seasonally-inundated savannahs has revealed stratified shell middens produced by human foragers as early as 10,000 years ago, making them the oldest archaeological sites in the region. The absence of stone resources and partial burial by recent alluvial sediments has meant that these kinds of deposits have, until now, remained unidentified. We conducted core sampling, archaeological excavations and an interdisciplinary study of the stratigraphy and recovered materials from three shell midden mounds. Based on multiple lines of evidence, including radiocarbon dating, sedimentary proxies (elements, steroids and black carbon), micromorphology and faunal analysis, we demonstrate the anthropogenic origin and antiquity of these sites. In a tropical and geomorphologically active landscape often considered challenging both for early human occupation and for the preservation of hunter-gatherer sites, the newly discovered shell middens provide evidence for early to middle Holocene occupation and illustrate the potential for identifying and interpreting early open-air archaeological sites in western Amazonia. The existence of early hunter-gatherer sites in the Bolivian lowlands sheds new light on the region’s past and offers a new context within which the late Holocene “Earthmovers” of the Llanos de Moxos could have emerged.

Andrew W. Tweel,  R Turner (2012)
Hurricanes Katrina, Rita, Gustav, and Ike deposited large quantities of sediment on coastal wetlands after making landfall in the northern Gulf of Mexico. We sampled sediments deposited on the wetland surface throughout the entire Louisiana and Texas depositional surfaces of Hurricanes Katrina, Rita, Gustav, and the Louisiana portion of Hurricane Ike. We used spatial interpolation to model the total amount and spatial distribution of inorganic sediment deposition from each storm. The sediment deposition on coastal wetlands was an estimated 68, 48, and 21 million metric tons from Hurricanes Katrina, Rita, and Gustav, respectively. The spatial distribution decreased in a similar manner with distance from the coast for all hurricanes, but the relationship with distance from the storm track was more variable between events. The southeast-facing Breton Sound estuary had significant storm-derived sediment deposition west of the storm track, whereas sediment deposition along the south-facing coastline occurred primarily east of the storm track. Sediment organic content, bulk density, and grain size also decreased significantly with distance from the coast, but were also more variable with respect to distance from the track. On average, eighty percent of the mineral deposition occurred within 20 km from the coast, and 58% was within 50 km of the track. These results highlight an important link between tropical cyclone events and coastal wetland sedimentation, and are useful in identifying a more complete sediment budget for coastal wetland soils.

The National Basic Research Program (No. 2012CB956100), the National Natural Science Foundation of China (No. 41101195) and the Science Foundation of State Key Laboratory of Loess and Quaternary Geology (No. SKLLQG0910) supplied the financial supports of this paper. The funders had no role in study design, data collection and analysis, decision to publish, or preparation of the manuscript.