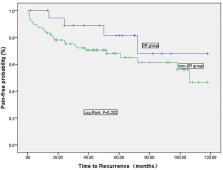 Microvascular decompression (MVD) combined with partial sensory rhizotomy (PSR) with the retrosigmoid approach has become the most effective surgical treatment for trigeminal neuralgia (TN). There is variability in the pain relief processes observed in postoperative patients. The purpose of this study was to investigate delayed relief (DR) and its predictors after MVD and/or PSR for the treatment of TN and study the long-term effects associated with DR.

Patients with primary TN who underwent MVD and/or PSR by the same surgeon at the China-Japan Friendship Hospital from March 2009 to December 2017 were included in the study, and all patients were followed for at least 1 year after the operation. DR was defined as follows: no changes in the Barrow Neurological Institute (BNI) score on the third day after surgery and a BNI score of I-II in the absence of any medication after a period of pain. Preoperative, intraoperative and postoperative differences were compared between the DR and non-DR groups, and the relationships between the various factors and DR was analyzed.

A total of 105 patients, including 20 patients with DR (19%), 78 patients with non-DR (74%), and 7 patients without relief, were included in this study. The follow-up period ranged from 13 months to 118 months (average, 5.39 years/65 months). The duration of postoperative pain in the DR group was 3–365 days, with an average of 108 days. Statistical analysis found that no factor predicted the occurrence of DR, and the occurrence of postoperative DR did not affect the long-term effects observed in patients.

J Zakrzewska,  M Brainin,  T. Nurmikko … (2008)
Several issues regarding diagnosis, pharmacological treatment, and surgical treatment of trigeminal neuralgia (TN) are still unsettled. The American Academy of Neurology and the European Federation of Neurological Societies launched a joint Task Force to prepare general guidelines for the management of this condition. After systematic review of the literature the Task Force came to a series of evidence-based recommendations. In patients with TN MRI may be considered to identify patients with structural causes. The presence of trigeminal sensory deficits, bilateral involvement, and abnormal trigeminal reflexes should be considered useful to disclose symptomatic TN, whereas younger age of onset, involvement of the first division, unresponsiveness to treatment and abnormal trigeminal evoked potentials are not useful in distinguishing symptomatic from classic TN. Carbamazepine (stronger evidence) or oxcarbazepine (better tolerability) should be offered as first-line treatment for pain control. For patients with TN refractory to medical therapy early surgical therapy may be considered. Gasserian ganglion percutaneous techniques, gamma knife and microvascular decompression may be considered. Microvascular decompression may be considered over other surgical techniques to provide the longest duration of pain freedom. The role of surgery versus pharmacotherapy in the management of TN in patients with multiple sclerosis remains uncertain.

A G Shetter,  Michael Fiedler,  Lorraine P. Smith … (2000)
To assess the efficacy and complications of Gamma Knife radiosurgery for trigeminal neuralgia. The Barrow Neurological Institute (BNI) Gamma Knife facility has been operational since March 17, 1997. A total of 557 patients have been treated, 89 for trigeminal neuralgia (TN). This report includes the first 54 TN patients with follow-up exceeding 3 months. Patients were treated with Gamma Knife stereotactic radiosurgery (RS) in uniform fashion according to two sequential protocols. The first 41 patients received 35 Gy prescribed to the 50% isodose via a single 4-mm isocenter targeting the ipsilateral trigeminal nerve adjacent to the pons. The dose was increased to 40 Gy for the remaining 13 patients; however, the other parameters were unvaried. Outcome was evaluated by each patient using a standardized questionnaire. Pain before and after RS was scored as level I-IV per our newly-developed BNI pain intensity scoring criteria (I: no pain; II: occasional pain, not requiring medication; III: some pain, controlled with medication; IV: some pain, not controlled with medication; V: severe pain/no pain relief). Complications, limited to mild facial numbness, were similarly graded by a BNI scoring system. Among our 54 TN patients, 52 experienced pain relief, BNI score I in 19 (35%), II in 3 (6%), III in 26 (48%), and IV in 4 (7%). Two patients (4%) reported no relief (BNI score V). Median follow-up was 12 months (range 3-28). Median time to onset of pain relief was 15 days (range 0-192), and to maximal relief 63 days (range 0-253). Seventeen (31%) noted immediate improvement (

François R. Chapuis,  J Leston,  M Sindou … (2007)
The purpose of this study was to evaluate the long-term efficacy of microvascular decompression (MVD) and to identify the factors affecting outcome in patients treated for primary trigeminal neuralgia (TN). Only the cases with a clear-cut neurovascular conflict (vascular contact and/or compression of the root entry zone of the trigeminal nerve) found at surgery and treated with "pure" MVD (decompression of the root without any additional lesioning or cutting of the adjacent rootlets) were retained. The study included 362 patients who were followed up over a period of 1 to 18 years (median follow-up 7.2 years). A Kaplan-Meier survival analysis was generated at 1 and 15 years of follow-up for all of the considered factors. According to Kaplan-Meier analysis, the success rate (defined as pain-free patients without any medication) was 91% at 1 year and estimated to be 73.38% after 15 years of follow-up. None of the following patient-related factors played any significant role in prognosis: sex, patient age at surgery, history of systemic hypertension, duration of neuralgia before surgery, or history of failed trigeminal surgery. Patients with atypical neuralgia (a baseline of permanent pain) had the same outcome as those with a typical (purely spasmodic) presentation. In addition, the side and topography of the trigeminal nerve did not play a role, whereas involvement of all three divisions of the nerve had a negative effect on outcome. Concerning anatomical factors, neither the type of the compressive vessel nor its location along or around the root was found to be significant. However, the severity of compression was important-the more severe the degree of compression, the better the outcome (p = 0.002). The authors also found that presence of focal arachnoiditis had a negative influence on outcome (p = 0.002). Pure MVD can offer patients affected by a primary TN a 73.38% probability of long-term (15 years) cure of neuralgia. The presence of a clear-cut and marked vascular compression at surgery (and possibly-although not yet reliably--on preoperative magnetic resonance imaging) is the guarantee of a higher than 90% success rate.