Challenges and proposed solutions for formative research to inform systematic intervention development in rare and unstudied conditions: The case example of Xeroderma Pigmentosum 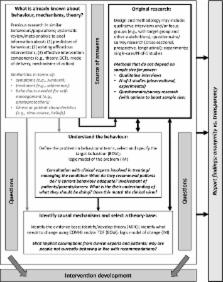 Linda Kwakkenbos,  Lisa Jewett,  Murray Baron … (2013)
Introduction Psychosocial and rehabilitation interventions are increasingly used to attenuate disability and improve health-related quality of life (HRQL) in chronic diseases, but are typically not available for patients with rare diseases. Conducting rigorous, adequately powered trials of these interventions for patients with rare diseases is difficult. The Scleroderma Patient-centered Intervention Network (SPIN) is an international collaboration of patient organisations, clinicians and researchers. The aim of SPIN is to develop a research infrastructure to test accessible, low-cost self-guided online interventions to reduce disability and improve HRQL for people living with the rare disease systemic sclerosis (SSc or scleroderma). Once tested, effective interventions will be made accessible through patient organisations partnering with SPIN. Methods and analysis SPIN will employ the cohort multiple randomised controlled trial (cmRCT) design, in which patients consent to participate in a cohort for ongoing data collection. The aim is to recruit 1500–2000 patients from centres across the world within a period of 5 years (2013–2018). Eligible participants are persons ≥18 years of age with a diagnosis of SSc. In addition to baseline medical data, participants will complete patient-reported outcome measures every 3 months. Upon enrolment in the cohort, patients will consent to be contacted in the future to participate in intervention research and to allow their data to be used for comparison purposes for interventions tested with other cohort participants. Once interventions are developed, patients from the cohort will be randomly selected and offered interventions as part of pragmatic RCTs. Outcomes from patients offered interventions will be compared with outcomes from trial-eligible patients who are not offered the interventions. Ethics and dissemination The use of the cmRCT design, the development of self-guided online interventions and partnerships with patient organisations will allow SPIN to develop, rigourously test and effectively disseminate psychosocial and rehabilitation interventions for people with SSc.

The state of the art and future opportunities for using longitudinal n-of-1 methods in health behaviour research: a systematic literature overview.