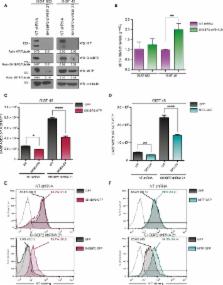 Gastrointestinal stromal tumors ( GISTs) represent about 80% of the mesenchymal neoplasms of the gastrointestinal tract. Most GISTs contain oncogenic KIT (85%) or PDGFRA (5%) receptors. The kinase inhibitor imatinib mesylate is the preferential treatment for these tumors; however, the development of drug resistance has highlighted the need for novel therapeutic strategies. Recently, we reported that the adaptor molecule SH3 Binding Protein 2 ( SH3 BP2) regulates KIT expression and signaling in human mast cells. Our current study shows that SH3 BP2 is expressed in primary tumors and cell lines from GIST patients and that SH3 BP2 silencing leads to a downregulation of oncogenic KIT and PDGFRA expression and an increase in apoptosis in imatinib‐sensitive and imatinib‐resistant GIST cells. The microphthalmia‐associated transcription factor ( MITF), involved in KIT expression in mast cells and melanocytes, is expressed in GISTs. Interestingly, MITF is reduced after SH3 BP2 silencing. Importantly, reconstitution of both SH3 BP2 and MITF restores cell viability. Furthermore, SH3 BP2 silencing significantly reduces cell migration and tumor growth of imatinib‐sensitive and imatinib‐resistant cells in vivo. Altogether, SH3 BP2 regulates KIT and PDGFRA expression and cell viability, indicating a role as a potential target in imatinib‐sensitive and imatinib‐resistant GISTs.

D B Longley,  Gordon J. Berman,  Christopher Fletcher … (2002)
As a result of major recent advances in understanding the biology of gastrointestinal stromal tumors (GISTs), specifically recognition of the central role of activating KIT mutations and associated KIT protein expression in these lesions, and the development of novel and effective therapy for GISTs using the receptor tyrosine kinase inhibitor STI-571, these tumors have become the focus of considerable attention by pathologists, clinicians, and patients. Stromal/mesenchymal tumors of the gastrointestinal tract have long been a source of confusion and controversy with regard to classification, line(s) of differentiation, and prognostication. Characterization of the KIT pathway and its phenotypic implications has helped to resolve some but not all of these issues. Given the now critical role of accurate and reproducible pathologic diagnosis in ensuring appropriate treatment for patients with GIST, the National Institutes of Health convened a GIST workshop in April 2001 with the goal of developing a consensus approach to diagnosis and morphologic prognostication. Key elements of the consensus, as described herein, are the defining role of KIT immunopositivity in diagnosis and a proposed scheme for estimating metastatic risk in these lesions, based on tumor size and mitotic count, recognizing that it is probably unwise to use the definitive term "benign" for any GIST, at least at the present time. Copyright 2002, Elsevier Science (USA). All rights reserved.