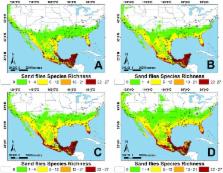 Ecological niche models are useful tools to infer potential spatial and temporal distributions in vector species and to measure epidemiological risk for infectious diseases such as the Leishmaniases. The ecological niche of 28 North and Central American sand fly species, including those with epidemiological relevance, can be used to analyze the vector's ecology and its association with transmission risk, and plan integrated regional vector surveillance and control programs. In this study, we model the environmental requirements of the principal North and Central American phlebotomine species and analyze three niche characteristics over future climate change scenarios: i) potential change in niche breadth, ii) direction and magnitude of niche centroid shifts, iii) shifts in elevation range. Niche identity between confirmed or incriminated Leishmania vector sand flies in Mexico, and human cases were analyzed. Niche models were constructed using sand fly occurrence datapoints from Canada, USA, Mexico, Guatemala and Belize. Nine non-correlated bioclimatic and four topographic data layers were used as niche components using GARP in OpenModeller. Both B2 and A2 climate change scenarios were used with two general circulation models for each scenario (CSIRO and HadCM3), for 2020, 2050 and 2080. There was an increase in niche breadth to 2080 in both scenarios for all species with the exception of Lutzomyia vexator. The principal direction of niche centroid displacement was to the northwest (64%), while the elevation range decreased greatest for tropical, and least for broad-range species. Lutzomyia cruciata is the only epidemiologically important species with high niche identity with that of Leishmania spp. in Mexico. Continued landscape modification in future climate change will provide an increased opportunity for the geographic expansion of NCA sand flys' ENM and human exposure to vectors of Leishmaniases.

The present study models the niche of the most abundant sand fly species in North and Central America, including all proven and incriminated vectors of Leishmaniases, an important neglected tropical disease of the region. The expansion and elevation or centroid shifts of the species' niche are modeled for extreme (A2) and conservative (B2) climate change scenarios to 2020, 2050 and 2080. In climate change scenarios, models predict significant niche breadth changes in geographic space, principally in temperate sand fly species, while elevation shifts occur principally in tropical, and greatest, in vector species. Niche centroid shifts for individual species were predominately to the northwest, and secondarily to the northeast. The highest proportion of human population at-risk for contact with a vector species was with Lutzomyia diabolica and Lutzomyia shannoni. Despite the fact that Lutzomyia olmeca olmeca is the only confirmed vector species in Mexico, the present study demonstrates a significant niche identity between Leishmania spp. and Lutzomyia cruciata.

Global biodiversity scenarios for the year 2100.

O. Sala, F Chapin, J. J. Armesto … (2000)
Scenarios of changes in biodiversity for the year 2100 can now be developed based on scenarios of changes in atmospheric carbon dioxide, climate, vegetation, and land use and the known sensitivity of biodiversity to these changes. This study identified a ranking of the importance of drivers of change, a ranking of the biomes with respect to expected changes, and the major sources of uncertainties. For terrestrial ecosystems, land-use change probably will have the largest effect, followed by climate change, nitrogen deposition, biotic exchange, and elevated carbon dioxide concentration. For freshwater ecosystems, biotic exchange is much more important. Mediterranean climate and grassland ecosystems likely will experience the greatest proportional change in biodiversity because of the substantial influence of all drivers of biodiversity change. Northern temperate ecosystems are estimated to experience the least biodiversity change because major land-use change has already occurred. Plausible changes in biodiversity in other biomes depend on interactions among the causes of biodiversity change. These interactions represent one of the largest uncertainties in projections of future biodiversity change.

Potential effect of population and climate changes on global distribution of dengue fever: an empirical model.

We thank the Consejo Nacional de Ciencia y Tecnología (CONACYT) for a scholarship to DML (2009–2011). The project was financed partially by a grant from CONACYT-SEMARNAT #108158 to JMR (Instituto Nacional de Salud Pública). The funders had no role in study design, data collection and analysis, decision to publish, or preparation of the manuscript.