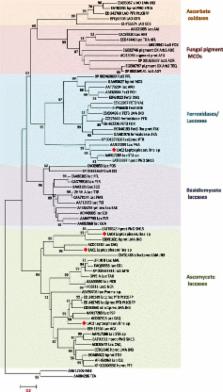 Fungal laccases are multicopper oxidases (MCOs) with high biotechnological potential due to their capability to oxidize a wide range of aromatic contaminants using oxygen from the air. Albeit the numerous laccase-like genes described in ascomycete fungi, ascomycete laccases have been less thoroughly studied than white-rot basidiomycetous laccases. A variety of MCO genes has recently been discovered in plant pathogenic ascomycete fungi, however little is known about the presence and function of laccases in these fungi or their potential use as biocatalysts. We aim here to identify the laccase-type oxidoreductases that might be involved in the decolorization of dyes by Leptosphaerulina sp. and to characterize them as potential biotechnological tools.

A Leptosphaerulina fungal strain, isolated from lignocellulosic material in Colombia, produces laccase as the main ligninolytic oxidoreductase activity during decolorization of synthetic organic dyes. Four laccase-type MCO genes were partially amplified from the genomic DNA using degenerate primers based on laccase-specific signature sequences. The phylogenetic analysis showed the clustering of Lac1, Lac4 and Lac3 with ascomycete laccases, whereas Lac2 grouped with fungal ferroxidases (together with other hypothetical laccases). Lac3, the main laccase produced by Leptosphaerulina sp. in dye decolorizing and laccase-induced cultures (according to the shotgun analysis of both secretomes) was purified and characterized in this study. It is a sensu-stricto laccase able to decolorize synthetic organic dyes with high efficiency particularly in the presence of natural mediator compounds.

The searching for laccase-type MCOs in ascomycetous families where their presence is poorly known, might provide a source of biocatalysts with potential biotechnological interest and shed light on their role in the fungus. The information provided by the use of genomic and proteomic tools must be combined with the biochemical evaluation of the enzyme to prove its catalytic activity and applicability potential.

Angel Martínez,  Luis Larrondo,  Hui Sun … (2012)
Wood is a major pool of organic carbon that is highly resistant to decay, owing largely to the presence of lignin. The only organisms capable of substantial lignin decay are white rot fungi in the Agaricomycetes, which also contains non-lignin-degrading brown rot and ectomycorrhizal species. Comparative analyses of 31 fungal genomes (12 generated for this study) suggest that lignin-degrading peroxidases expanded in the lineage leading to the ancestor of the Agaricomycetes, which is reconstructed as a white rot species, and then contracted in parallel lineages leading to brown rot and mycorrhizal species. Molecular clock analyses suggest that the origin of lignin degradation might have coincided with the sharp decrease in the rate of organic carbon burial around the end of the Carboniferous period.