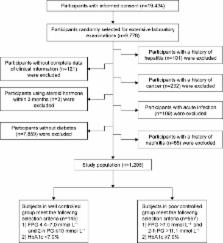 The red cell distribution width (RDW) has been shown to be associated with the incidence and complications of type 2 diabetes (T2D). However, the relevance of RDW with the risk of being in poor glycemic control among patients with established T2D is largely overlooked.

A total of 702 T2D participants from the REACTION study were enrolled in this study. Blood routine index, fasting plasma glucose, hemoglobin A1c and lipid profile data were available for all of the enrolled population.

The univariate logistic analysis revealed a significant association between RDW and the risk of being in poor glycemic control among T2D subjects with an odds ratio (OR) and a 95% confidence interval (CI) of 0.5 and 0.3–0.8, respectively, for the fourth vs the first quartile of RDW. The association strengthened after multivariable adjustment (OR [95% CI]: 0.3 [0.2–0.7]). Interaction and stratified analyses indicated that this association was seen only among T2D subjects with lower body mass index and/or serum lipid levels.

High white blood cell count is associated with a worsening of insulin sensitivity and predicts the development of type 2 diabetes.

Clifton Bogardus,  R Pratley,  Barbora Vozarova … (2002)
Chronic low-grade inflammation may be involved in the pathogenesis of insulin resistance and type 2 diabetes. We examined whether a high white blood cell count (WBC), a marker of inflammation, predicts a worsening of insulin action, insulin secretory function, and the development of type 2 diabetes in Pima Indians. We measured WBC in 352 nondiabetic Pima Indians (215 men and 137 women, aged 27 +/- 6 years [means +/- SD], body fat 32 +/- 8%, WBC 8,107 +/- 2,022 cells/mm(3)) who were characterized for body composition (by hydrodensitometry or dual-energy X-ray absorptiometry), glucose tolerance (by 75-g oral glucose tolerance test), insulin action (M; by hyperinsulinemic clamp), and acute insulin secretory response (AIR; by 25-g intravenous glucose challenge). Among 272 subjects who were normal glucose tolerant (NGT) at baseline, 54 developed diabetes over an average follow-up of 5.5 +/- 4.4 years. Among those who remained nondiabetic, 81 subjects had follow-up measurements of M and AIR. Cross-sectionally, WBC was related to percent body fat (r = 0.32, P < 0.0001) and M (r = -0.24, P < 0.0001), but not to AIR (r = 0.06, P = 0.4). In a multivariate analysis, when adjusted for age and sex, both percent body fat (P < 0.0001) and M (P = 0.03) were independently associated with WBC. A high WBC value predicted diabetes (relative hazard 90th vs. 10th percentiles [95%CI] of 2.7 [1.3-5.4], P = 0.007) when adjusted for age and sex. The predictive effect of WBC persisted after additional adjustment for established predictors of diabetes, i.e., percent body fat, M, and AIR (relative hazard 2.6 [1.1-6.2], P = 0.03). After adjustment for follow-up duration, a high WBC at baseline was associated with a subsequent worsening of M (P = 0.003), but not a worsening of AIR. A high WBC predicts a worsening of insulin action and the development of type 2 diabetes in Pima Indians. These findings are consistent with the hypothesis that a chronic activation of the immune system may play a role in the pathogenesis of type 2 diabetes.

P. Ciraolo,  Clinton Joiner,  Lorraine P. Smith … (2008)
Although red blood cell (RBC) life span is a known determinant of percentage hemoglobin A1c (HbA1c), its variation has been considered insufficient to affect clinical decisions in hematologically normal persons. However, an unexplained discordance between HbA1c and other measures of glycemic control can be observed that could be, in part, the result of differences in RBC life span. To explore the hypothesis that variation in RBC life span could alter measured HbA1c sufficiently to explain some of this discordance, we determined RBC life span using a biotin label in 6 people with diabetes and 6 nondiabetic controls. Mean RBC age was calculated from the RBC survival curve for all circulating RBCs and for labeled RBCs at multiple time points as they aged. In addition, HbA1c in magnetically isolated labeled RBCs and in isolated transferrin receptor-positivereticulocytes was used to determine the in vivo synthetic rate of HbA1c. The mean age of circulating RBCs ranged from 39 to 56 days in diabetic subjects and 38 to 60 days in nondiabetic controls. HbA1c synthesis was linear and correlated with mean whole blood HbA1c (R(2) = 0.91). The observed variation in RBC survival was large enough to cause clinically important differences in HbA1c for a given mean blood glucose.

Improved classification of anemias by MCV and RDW.

Todd P. Gilmer,  Martin Gardner,  Maurice Bessman (1983)
New automated blood cell analyzers provide an index of red cell volume distribution width (RDW) or heterogeneity and a histogram display of red cell volume distribution. We have developed a classification of red cell disorders, based on mean corpuscular volume (MCV) or red cell size, heterogeneity, and histograms, to guide diagnosis from the peripheral blood analysis. The distinction of iron deficiency anemia from heterozygous thalassemia or the anemia of chronic disease and the detection of early iron and folate deficiency is improved. Red cell volume distribution histograms identify red cell fragmentation or agglutination, dimorphic populations, and artifactual counting of lymphocytes as red cells. We recommend the use of these new variables in the initial classification of anemia by the practicing physician.