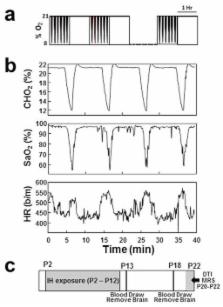 Preterm infants are frequently exposed to intermittent hypoxia (IH) associated with apnea and periodic breathing that may result in inflammation and brain injury that later manifests as cognitive and executive function deficits. We used a rodent model to determine whether early postnatal exposure to IH would result in inflammation and brain injury.

Rat pups were exposed to IH from P2–P12. Control animals were exposed to room air. Cytokines were analyzed in plasma and brain tissue at P13 and P18. At P20–P22, diffusion tensor imaging (DTI) and magnetic resonance spectroscopy (MRS) were performed.

Pups exposed to IH had increased plasma Gro/CXCL1 and cerebellar IFN-γ and IL-1β at P13, and brainstem enolase at P18. DTI showed a decrease in FA and AD in the corpus callosum (CC) and cingulate gyrus and an increase in RD in the CC. MRS revealed decreases in NAA/Cho, Cr, Tau/Cr and Gly/Cr and increases in TCho and GPC in the brainstem and decreases in NAA/Cho in the hippocampus.

We conclude that early postnatal exposure to IH, similar in magnitude experienced in human preterm infants, is associated with evidence for pro-inflammatory changes, decreases in white matter integrity, and metabolic changes consistent with hypoxia.

Association Between Intermittent Hypoxemia or Bradycardia and Late Death or Disability in Extremely Preterm Infants.

Christian Poets,  Robin Roberts,  Barbara Schmidt … (2015)
Extremely preterm infants may experience intermittent hypoxemia or bradycardia for many weeks after birth. The prognosis of these events is uncertain.

Neuroprotection and remyelination after autoimmune demyelination in mice that inducibly overexpress CXCL1.

Kakuri M Omari,  Sarah E. Lutz,  Laura Santambrogio … (2009)
In rodents, the chemokine CXCL1 both induces the proliferation and inhibits the migration of oligodendrocyte precursor cells. We previously reported that in multiple sclerosis, the same chemokine is expressed by hypertrophic astrocytes, which associate with oligodendrocytes that express the receptor CXCR2. To investigate whether chemokines influence repair after autoimmune demyelination, we generated GFAP-rtTA x beta-Gal-TRE-CXCL1 double-transgenic (Tg) mice that inducibly overexpress CXCL1 under the control of the astrocyte-specific gene, glial fibrillary acidic protein. Experimental autoimmune encephalomyelitis, an animal model of multiple sclerosis, was induced in these animals (and controls) by the subcutaneous injection of myelin oligodendrocyte glycoprotein, and after disease onset, CXCL1 production was initiated by the intraperitoneal injection of doxycycline. Double-Tg animals displayed a milder course of disease compared with both single (CXCL1 or glial fibrillary acidic protein)-Tg and wild-type controls. Pathologies were similar in all groups during the acute stage of disease. During the chronic disease phase, both inflammation and demyelination were diminished in double-Tg mice and Wallerian degeneration was markedly decreased. Remyelination was strikingly more prominent in double-Tg mice, together with an apparent increased number of oligodendrocytes. Moreover, cell proliferation, indicated by BrdU incorporation within the central nervous system, was more widespread in the white matter of double-Tg animals. These findings suggest a neuroprotective role for CXCL1 during the course of autoimmune demyelination.