Associations Between Online Pornography Consumption and Sexual Dysfunction in Young Men: Multivariate Analysis Based on an International Web-Based Survey 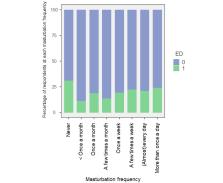 Expanding access to the internet has resulted in more and earlier consumption of online pornography. At the same time, a higher prevalence of erectile dysfunction (ED) among young men is seen. Increased pornography consumption has been suggested as a possible explanation for this rise.

The aim of this study was to better understand associations between problematic pornography consumption (PPC) and ED.

This prevalence of ED in young men is alarmingly high, and the results of this study suggest a significant association with PPC.

Improving the Quality of Web Surveys: The Checklist for Reporting Results of Internet E-Surveys (CHERRIES)

Gunther Eysenbach (2004)
Analogous to checklists of recommendations such as the CONSORT statement (for randomized trials), or the QUORUM statement (for systematic reviews), which are designed to ensure the quality of reports in the medical literature, a checklist of recommendations for authors is being presented by the Journal of Medical Internet Research (JMIR) in an effort to ensure complete descriptions of Web-based surveys. Papers on Web-based surveys reported according to the CHERRIES statement will give readers a better understanding of the sample (self-)selection and its possible differences from a “representative” sample. It is hoped that author adherence to the checklist will increase the usefulness of such reports.

George Ellison, Maciej Liskiewicz, Johannes Textor … (2017)
Directed acyclic graphs (DAGs), which offer systematic representations of causal relationships, have become an established framework for the analysis of causal inference in epidemiology, often being used to determine covariate adjustment sets for minimizing confounding bias. DAGitty is a popular web application for drawing and analysing DAGs. Here we introduce the R package 'dagitty', which provides access to all of the capabilities of the DAGitty web application within the R platform for statistical computing, and also offers several new functions. We describe how the R package 'dagitty' can be used to: evaluate whether a DAG is consistent with the dataset it is intended to represent; enumerate 'statistically equivalent' but causally different DAGs; and identify exposure-outcome adjustment sets that are valid for causally different but statistically equivalent DAGs. This functionality enables epidemiologists to detect causal misspecifications in DAGs and make robust inferences that remain valid for a range of different DAGs. The R package 'dagitty' is available through the comprehensive R archive network (CRAN) at [https://cran.r-project.org/web/packages/dagitty/]. The source code is available on github at [https://github.com/jtextor/dagitty]. The web application 'DAGitty' is free software, licensed under the GNU general public licence (GPL) version 2 and is available at [http://dagitty.net/].

Adolescents and Pornography: A Review of 20 Years of Research.

Jochen Peter, Patti Valkenburg (2022)
The goal of this review was to systematize empirical research that was published in peer-reviewed English-language journals between 1995 and 2015 on the prevalence, predictors, and implications of adolescents' use of pornography. This research showed that adolescents use pornography, but prevalence rates varied greatly. Adolescents who used pornography more frequently were male, at a more advanced pubertal stage, sensation seekers, and had weak or troubled family relations. Pornography use was associated with more permissive sexual attitudes and tended to be linked with stronger gender-stereotypical sexual beliefs. It also seemed to be related to the occurrence of sexual intercourse, greater experience with casual sex behavior, and more sexual aggression, both in terms of perpetration and victimization. The findings of this review need to be seen against the background of various methodological and theoretical shortcomings, as well as several biases in the literature, which currently precludes internally valid causal conclusions about effects of pornography on adolescents.

This is an open-access article distributed under the terms of the Creative Commons Attribution License ( https://creativecommons.org/licenses/by/4.0/), which permits unrestricted use, distribution, and reproduction in any medium, provided the original work, first published in JMIR Public Health and Surveillance, is properly cited. The complete bibliographic information, a link to the original publication on https://publichealth.jmir.org, as well as this copyright and license information must be included.