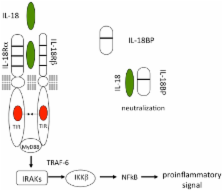 Interleukin-18 (IL-18) is a member of the IL-1 family of cytokines. Similar to IL-1β, IL-18 is synthesized as an inactive precursor requiring processing by caspase-1 into an active cytokine but unlike IL-1β, the IL-18 precursor is constitutively present in nearly all cells in healthy humans and animals. The activity of IL-18 is balanced by the presence of a high affinity, naturally occurring IL-18 binding protein (IL-18BP). In humans, increased disease severity can be associated with an imbalance of IL-18 to IL-18BP such that the levels of free IL-18 are elevated in the circulation. Increasing number of studies have expanded the role of IL-18 in mediating inflammation in animal models of disease using the IL-18BP, IL-18-deficient mice, neutralization of IL-18, or deficiency in the IL-18 receptor alpha chain. A role for IL-18 has been implicated in several autoimmune diseases, myocardial function, emphysema, metabolic syndromes, psoriasis, inflammatory bowel disease, hemophagocytic syndromes, macrophage activation syndrome, sepsis, and acute kidney injury, although in some models of disease, IL-18 is protective. IL-18 plays a major role in the production of interferon-γ from T-cells and natural killer cells. The IL-18BP has been used safely in humans and clinical trials of IL-18BP as well as neutralizing anti-IL-18 antibodies are in clinical trials. This review updates the biology of IL-18 as well as its role in human disease.

K. Nakanishi, T Yoshimoto, H Tsutsui … (2001)
Although interleukin-18 is structurally homologous to IL-1 and its receptor belongs to the IL-1R/Toll-like receptor (TLR) superfamily, its function is quite different from that of IL-1. IL-18 is produced not only by types of immune cells but also by non-immune cells. In collaboration with IL-12, IL-18 stimulates Th1-mediated immune responses, which play a critical role in the host defense against infection with intracellular microbes through the induction of IFN-gamma. However, the overproduction of IL-12 and IL-18 induces severe inflammatory disorders, suggesting that IL-18 is a potent proinflammatory cytokine that has pathophysiological roles in several inflammatory conditions. IL-18 mRNA is expressed in a wide range of cells including Kupffer cells, macrophages, T cells, B cells, dendritic cells, osteoblasts, keratinocytes, astrocytes, and microglia. Thus, the pathophysiological role of IL-18 has been extensively tested in the organs that contain these cells. Somewhat surprisingly, IL-18 alone can stimulate Th2 cytokine production as well as allergic inflammation. Therefore, the functions of IL-18 in vivo are very heterogeneous and complicated. In principle, IL-18 enhances the IL-12-driven Th1 immune responses, but it can also stimulate Th2 immune responses in the absence of IL-12.

An autoinflammatory disease with deficiency of the interleukin-1-receptor antagonist.

Ivona Aksentijevich, Seth Masters, Polly J. Ferguson … (2009)
Autoinflammatory diseases manifest inflammation without evidence of infection, high-titer autoantibodies, or autoreactive T cells. We report a disorder caused by mutations of IL1RN, which encodes the interleukin-1-receptor antagonist, with prominent involvement of skin and bone. We studied nine children from six families who had neonatal onset of sterile multifocal osteomyelitis, periostitis, and pustulosis. Response to empirical treatment with the recombinant interleukin-1-receptor antagonist anakinra in the first patient prompted us to test for the presence of mutations and changes in proteins and their function in interleukin-1-pathway genes including IL1RN. We identified homozygous mutations of IL1RN in nine affected children, from one family from Newfoundland, Canada, three families from The Netherlands, and one consanguineous family from Lebanon. A nonconsanguineous patient from Puerto Rico was homozygous for a genomic deletion that includes IL1RN and five other interleukin-1-family members. At least three of the mutations are founder mutations; heterozygous carriers were asymptomatic, with no cytokine abnormalities in vitro. The IL1RN mutations resulted in a truncated protein that is not secreted, thereby rendering cells hyperresponsive to interleukin-1beta stimulation. Patients treated with anakinra responded rapidly. We propose the term deficiency of the interleukin-1-receptor antagonist, or DIRA, to denote this autosomal recessive autoinflammatory disease caused by mutations affecting IL1RN. The absence of interleukin-1-receptor antagonist allows unopposed action of interleukin-1, resulting in life-threatening systemic inflammation with skin and bone involvement. (ClinicalTrials.gov number, NCT00059748.) 2009 Massachusetts Medical Society

This article was submitted to Inflammation, a section of the journal Frontiers in Immunology.