Tuberculosis among Health-Care Workers in Low- and Middle-Income Countries: A Systematic Review 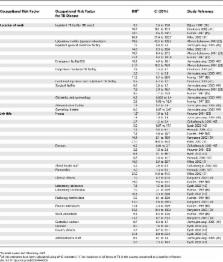 We conducted a systematic review to summarize the evidence on the incidence and prevalence of latent TB infection (LTBI) and disease among HCWs in LMICs, and to evaluate the impact of various preventive strategies that have been attempted. To identify relevant studies, we searched electronic databases and journals, and contacted experts in the field. We identified 42 articles, consisting of 51 studies, and extracted data on incidence, prevalence, and risk factors for LTBI and disease among HCWs. The prevalence of LTBI among HCWs was, on average, 54% (range 33% to 79%). Estimates of the annual risk of LTBI ranged from 0.5% to 14.3%, and the annual incidence of TB disease in HCWs ranged from 69 to 5,780 per 100,000. The attributable risk for TB disease in HCWs, compared to the risk in the general population, ranged from 25 to 5,361 per 100,000 per year. A higher risk of acquiring TB disease was associated with certain work locations (inpatient TB facility, laboratory, internal medicine, and emergency facilities) and occupational categories (radiology technicians, patient attendants, nurses, ward attendants, paramedics, and clinical officers).

In summary, our review demonstrates that TB is a significant occupational problem among HCWs in LMICs. Available evidence reinforces the need to design and implement simple, effective, and affordable TB infection-control programs in health-care facilities in these countries.

A systematic review demonstrates that tuberculosis is an important occupational problem among health care workers in low and middle-income countries.

One third of the world's population is infected with Mycobacterium tuberculosis, the bacterium that causes tuberculosis (TB). In many people, the bug causes no health problems—it remains latent. But about 10% of infected people develop active, potentially fatal TB, often in their lungs. People with active pulmonary TB readily spread the infection to other people, including health-care workers (HCWs), in small airborne droplets produced when they cough or sneeze. In high-income countries such as the US, guidelines are in place to minimize the transmission of TB in health-care facilities. Administrative controls (for example, standard treatment plans for people with suspected or confirmed TB) aim to reduce the exposure of HCWs to people with TB. Environmental controls (for example, the use of special isolation rooms) aim to prevent the spread and to reduce the concentration of infectious droplets in the air. Finally, respiratory-protection controls (for example, personal respirators for nursing staff) aim to reduce the risk of infection when exposure to M. tuberculosis is unavoidably high. Together, these three layers of control have reduced the incidence of TB in HCWs (the number who catch TB annually) in high-income countries.

But what about low- and middle-income countries (LMICs) where more than 90% of the world's cases of TB occur? Here, there is little money available to implement even low-cost strategies to reduce TB transmission in health-care facilities—so how important an occupational disease is TB in HCWs in these countries? In this study, the researchers have systematically reviewed published papers to find out the incidence and prevalence (how many people in a population have a specific disease) of active TB and latent TB infections (LTBIs) in HCWs in LMICs. They have also investigated whether any of the preventative strategies used in high-income countries have been shown to reduce the TB burden in HCWs in poorer countries.

To identify studies on TB transmission to HCWs in LMICs, the researchers searched electronic databases and journals, and also contacted experts on TB transmission. They then extracted and analyzed the relevant data on TB incidence, prevalence, risk factors, and control measures. Averaged-out over the 51 identified studies, 54% of HCWs had LTBI. In most of the studies, increasing age and duration of employment in health-care facilities, indicating a longer cumulative exposure to infection, was associated with a higher prevalence of LTBI. The same trend was seen in a subgroup of medical and nursing students. After accounting for the incidence of TB in the relevant general population, the excess incidence of TB in the different studies that was attributable to being a HCW ranged from 25 to 5,361 cases per 100, 000 people per year. In addition, a higher risk of acquiring TB was associated with working in specific locations (for example, inpatient TB facilities or diagnostic laboratories) and with specific occupations, including nurses and radiology attendants; most of the health-care facilities examined in the published studies had no specific TB infection-control programs in place.

As with all systematic reviews, the accuracy of these findings may be limited by some aspects of the original studies, such as how the incidence of LTBI was measured. In addition, the possibility that the researchers missed some relevant published studies, or that only studies where there was a high incidence of TB in HCWs were published, may also affect the findings of this study. Nevertheless, they suggest that TB is an important occupational disease in HCWs in LMICs and that the HCWs most at risk of TB are those exposed to the most patients with TB. Reduction of that risk should be a high priority because occupational TB leads to the loss of essential, skilled HCWs. Unfortunately, there are few data available to indicate how this should be done. Thus, the researchers conclude, well-designed field studies are urgently needed to evaluate whether the TB-control measures that have reduced TB transmission to HCWs in high-income countries will work and be affordable in LMICs.

• US National Institute for Occupational Health and Safety, information about tuberculosis for health-care workers

Guidelines for preventing the transmission of Mycobacterium tuberculosis in health-care settings, 2005.

Paul Jensen, Lauren Lambert, Michael Iademarco … (2005)
In 1994, CDC published the Guidelines for Preventing the Transmission of Mycobacterium tuberculosis in HealthCare Facilities, 1994. The guidelines were issued in response to 1) a resurgence of tuberculosis (TB) disease that occurred in the United States in the mid-1980s and early 1990s, 2) the documentation of several high-profile health-care--associated (previously termed "nosocomial") outbreaks related to an increase in the prevalence of TB disease and human immunodeficiency virus (HIV) coinfection, 3) lapses in infection control practices, 4) delays in the diagnosis and treatment of persons with infectious TB disease, and 5) the appearance and transmission of multidrug-resistant (MDR) TB strains. The 1994 guidelines, which followed statements issued in 1982 and 1990, presented recommendations for TB infection control based on a risk assessment process that classified health-care facilities according to categories of TB risk, with a corresponding series of administrative, environmental, and respiratory protection control measures. The TB infection control measures recommended by CDC in 1994 were implemented widely in health-care facilities in the United States. The result has been a decrease in the number of TB outbreaks in health-care settings reported to CDC and a reduction in health-care-associated transmission of Mycobacterium tuberculosis to patients and health-care workers (HCWs). Concurrent with this success, mobilization of the nation's TB control programs succeeded in reversing the upsurge in reported cases of TB disease, and case rates have declined in the subsequent 10 years. Findings indicate that although the 2004 TB rate was the lowest recorded in the United States since national reporting began in 1953, the declines in rates for 2003 (2.3%) and 2004 (3.2%) were the smallest since 1993. In addition, TB infection rates greater than the U.S. average continue to be reported in certain racial/ethnic populations. The threat of MDR TB is decreasing, and the transmission of M. tuberculosis in health-care settings continues to decrease because of implementation of infection-control measures and reductions in community rates of TB. Given the changes in epidemiology and a request by the Advisory Council for the Elimination of Tuberculosis (ACET) for review and update of the 1994 TB infection control document, CDC has reassessed the TB infection control guidelines for health-care settings. This report updates TB control recommendations reflecting shifts in the epidemiology of TB, advances in scientific understanding, and changes in health-care practice that have occurred in the United States during the preceding decade. In the context of diminished risk for health-care-associated transmission of M. tuberculosis, this document places emphasis on actions to maintain momentum and expertise needed to avert another TB resurgence and to eliminate the lingering threat to HCWs, which is mainly from patients or others with unsuspected and undiagnosed infectious TB disease. CDC prepared the current guidelines in consultation with experts in TB, infection control, environmental control, respiratory protection, and occupational health. The new guidelines have been expanded to address a broader concept; health-care--associated settings go beyond the previously defined facilities. The term "health-care setting" includes many types, such as inpatient settings, outpatient settings, TB clinics, settings in correctional facilities in which health care is delivered, settings in which home-based health-care and emergency medical services are provided, and laboratories handling clinical specimens that might contain M. tuberculosis. The term "setting" has been chosen over the term "facility," used in the previous guidelines, to broaden the potential places for which these guidelines apply.

Interferon-gamma assays in the immunodiagnosis of tuberculosis: a systematic review.

* To whom correspondence should be addressed. E-mail: madhukar.pai@ 123456mcgill.ca