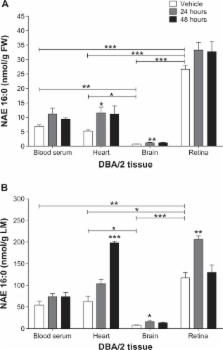 N-Palmitoylethanolamine (NAE 16:0) is an endogenous lipid signaling molecule that has limited water solubility, and its action is short-lived due to its rapid metabolism. This poses a problem for use in vivo as oral administration requires a high concentration for significant levels to reach target tissues, and injection of the compound in a dimethyl sulfoxide- or ethanol-based vehicle is usually not desirable during long-term treatment. A depot injection of NAE 16:0 was successfully emulsified in sterile corn oil (10 mg/kg) and administered in young DBA/2 mice in order to elevate baseline levels of NAE 16:0 in target tissues. NAE 16:0 levels were increased in various tissues, particularly in the retina, 24 and 48 hours following injections. Increases ranged between 22% and 215% (above basal levels) in blood serum, heart, brain, and retina and induced an entourage effect by increasing levels of other 18 carbon N-Acylethanolamines (NAEs), which ranged between 31% and 117% above baseline. These results indicate that NAE 16:0 can be used as a depot preparation, avoiding the use of inadequate vehicles, and can provide the basis for designing tissue-specific dosing regimens for therapies involving NAEs and related compounds.

Matthew N Hill,  Gregory E. Miller,  Erica Carrier … (2009)
Central endocannabinoid signaling is known to be responsive to stressful stimuli; however, there is no research to date characterizing the effects of stress on peripheral endocannabinoid content. The current study examined serum content of the endocannabinoid ligands N-arachidonylethanolamide (anandamide; AEA) and 2-arachidonoylglycerol (2-AG), and the non-cannabinoid N-acyl ethanolamine (NAE) molecules palmitoylethanolamide (PEA) and oleoylethanolamide (OEA) under basal conditions, immediately following the Trier Social Stress Test (TSST), and 30 min thereafter, in 15 medication-free women diagnosed with major depression, and 15 healthy matched controls. Basal serum concentrations of AEA and 2-AG, but not PEA or OEA, were significantly reduced in women with major depression relative to matched controls, indicating a deficit in peripheral endocannabinoid activity. Immediately following the TSST, serum 2-AG concentrations were increased compared to baseline; serum AEA concentration was unchanged at this time point. Serum concentrations of PEA and OEA were significantly lower than baseline 30 min following the cessation of the TSST. The magnitude of these responses did not differ between depressed and control subjects. These are the first data to demonstrate that the peripheral endocannabinoid/NAE system is responsive to exposure to stress.

Rowan Barrett,  Hector Ho,  Louise Randall (2008)
The endocannabinoid N-arachidonoylethanolamide (anandamide) is co-synthesized with other N-acylethanolamides, namely N-palmitoylethanolamide (PEA) and N-oleoylethanolamide (OEA), which have been shown to potentiate anandamide responses (so-called 'entourage effects') in non-vascular tissues. It remains unclear whether such interactions occur in the circulation. In rat isolated small mesenteric arteries, the effects of PEA and OEA on relaxation to anandamide and tissue contents of the N-acylethanolamides were examined under myographic conditions. Anandamide-induced relaxation was potentiated by pretreatment with PEA (10 microM) or OEA (1 microM), or in combination. The potentiation by PEA and OEA was endothelium-independent and abolished by treatment with capsaicin (10 microM), which desensitizes the transient receptor potential vanilloid type 1 (TRPV1) receptor system, or by the TRPV1 receptor antagonist, N-(3-methoxyphenyl)-4-chlorocinnamide (SB366791) (2 microM). It was also observed at molar ratios of anandamide and PEA (or OEA) similar to those found in mesenteric arteries. PEA and inhibition of anandamide hydrolysis by 3'-carbamoyl-biphenyl-3-yl-cyclohexylcarbamate (URB597) (1 microM) additively potentiated anandamide responses. On the other hand, PEA and OEA also induced vasorelaxation per se (rank order of potency: anandamide>OEA>PEA), but relaxation to the three N-acylethanolamides displayed different sensitivity to treatment with capsaicin, SB366791 and URB597. For example, relaxations to anandamide and OEA, but not PEA, were attenuated by both capsaicin and SB366791. This study shows that PEA and OEA potentiate relaxant responses to anandamide through TRPV1 receptors in rat small mesenteric arteries. The congeners also induce vasorelaxation per se, suggesting a function for the N-acylethanolamides in vascular control.