Efficacy and safety of Ginkgo biloba extract as an “add-on” treatment to metformin for patients with metabolic syndrome: a pilot clinical study 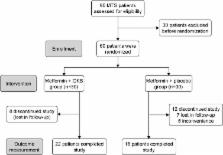 Ginkgo biloba (GKB) extract has shown to be beneficial in experimental models of metabolic and inflammatory disorders such as diabetes and metabolic syndrome (MTS). The objective of this pilot clinical study was to evaluate the effects of GKB extract as an “add-on” treatment with metformin (Met) in MTS patients.

The use of GKB extract as an adjuvant with Met was effective in improving the outcome of patients with MTS.

F. DeFeudis,  K Drieu (2000)
The effects of EGb 761 on the CNS underlie one of its major therapeutic indications; i.e., individuals suffering from deteriorating cerebral mechanisms related to age-associated impairments of memory, attention and other cognitive functions. EGb 761 is currently used as symptomatic treatment for cerebral insufficiency that occurs during normal ageing or which may be due to degenerative dementia, vascular dementia or mixed forms of both, and for neurosensory disturbances. Depressive symptoms of patients with Alzheimer's disease (AD) and aged non-Alzheimer patients may also respond to treatment with EGb 761 since this extract has an "anti-stress" effect. Basic and clinical studies, conducted both in vitro and in vivo, support these beneficial neuroprotective effects of EGb 761. EGb 761 has several major actions; it enhances cognition, improves blood rheology and tissue metabolism, and opposes the detrimental effects of ischaemia. Several mechanisms of action are useful in explaining how EGb 761 benefits patients with AD and other age-related, neurodegenerative disorders. In animals, EGb 761 possesses antioxidant and free radical-scavenging activities, it reverses age-related losses in brain alpha 1-adrenergic, 5-HT1A and muscarinic receptors, protects against ischaemic neuronal death, preserves the function of the hippocampal mossy fiber system, increases hippocampal high-affinity choline uptake, inhibits the down-regulation of hippocampal glucocorticoid receptors, enhances neuronal plasticity, and counteracts the cognitive deficits that follow stress or traumatic brain injury. Identified chemical constituents of EGb 761 have been associated with certain actions. Both flavonoid and ginkgolide constituents are involved in the free radical-scavenging and antioxidant effects of EGb 761 which decrease tissue levels of reactive oxygen species (ROS) and inhibit membrane lipid peroxidation. Regarding EGb 761-induced regulation of cerebral glucose utilization, bilobalide increases the respiratory control ratio of mitochondria by protecting against uncoupling of oxidative phosphorylation, thereby increasing ATP levels, a result that is supported by the finding that bilobalide increases the expression of the mitochondrial DNA-encoded COX III subunit of cytochrome oxidase. With regard to its "anti-stress" effect, EGb 761 acts via its ginkgolide constituents to decrease the expression of the peripheral benzodiazepine receptor (PBR) of the adrenal cortex.

Christopher Y. Park,  Vijay Mahadevan (2007)
The new age of nutraceuticals is now embracing the centuries old herbal extract of Ginkgo biloba (Mantissa Plantarum Altera, 1771, Ginkgoceae). The standardized preparation of the Ginkgo leaf extract (EGb 761) contained 2 main bioactive constituents, flavonoid glycosides (24%) and terpene lactones (6%), along with less than 5 ppm of the allergenic component, ginkgolic acid. The Ginkgo leaf extract has been reported to have neuroprotective, anticancer, cardioprotective, stress alleviating, and memory enhancing effects and possible effects on tinnitus, geriatric complaints, and psychiatric disorders. The therapeutic mechanisms of action of the Ginkgo leaf extract are suggested to be through its antioxidant, antiplatelet, antihypoxic, antiedemic, hemorrheologic, and microcirculatory actions, where the flavonoid and the terpenoid constituents may act in a complementary manner. Toxicity studies show that the Ginkgo leaf extract is relatively safe for consumption, although a few side effects have been reported, that is, intracerebral hemorrhage, gastrointestinal disturbances, headaches, dizziness, and allergic skin reactions. The use of Ginkgo leaf extract may be promising for treatment of certain conditions, although its long-term use still needs to be evaluated.

Seong Shim,  Joon Kim,  Chul Choi … (2012)
Ginkgo biloba extract (GBE) and anthocyanins are considered beneficial for various vascular diseases. This study was performed to evaluate the effect of GBE and anthocyanins on visual function in patients with normal tension glaucoma (NTG) based on the vascular theory of mechanisms of glaucomatous optic nerve damage. Retrospective analysis was carried out by a chart review of 332 subjects (209 men and 123 women) who were treated with anthocyanins (n=132), GBE (n=103), or no medication (control, n=97). Humphrey Visual Field (HVF) test, logarithm of the minimal angle of resolution best-corrected visual acuity (logMAR BCVA), intraocular pressure, blood pressure, and fasting blood glucose were determined before and after treatment. Complete ocular and systemic examinations were performed. The mean follow-up duration was 23.82±9.84 (range, 12-59) months; the mean anthocyanin treatment duration was 24.32±10.43 (range, 6-53) months, and the mean GBE treatment duration was 23.81±10.36 months (range, 6-59) months. After anthocyanin treatment, the mean BCVA for all eyes improved from 0.16 (±0.34) to 0.11 (±0.18) logMAR units (P=.008), and HVF mean deviation improved from -6.44 (±7.05) to -5.34 (±6.42) (P=.001). After GBE treatment, HVF mean deviation improved from -5.25 (±6.13) to -4.31 (±5.60) (P=.002). A generalized linear model demonstrated that the final BCVA was not affected by demographic differences among the groups. These results suggest that anthocyanins and GBE may be helpful in improving visual function in some individuals with NTG.