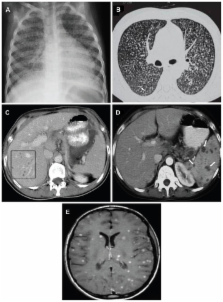 Tuberculosis (TB) remains one of the most important causes of death from an infectious disease, and it poses formidable challenges to global health at the public health, scientific, and political level. Miliary TB is a potentially fatal form of TB that results from massive lymphohematogenous dissemination of Mycobacterium tuberculosis bacilli. The epidemiology of miliary TB has been altered by the emergence of the human immunodeficiency virus (HIV) infection and widespread use of immunosuppressive drugs. Diagnosis of miliary TB is a challenge that can perplex even the most experienced clinicians. There are nonspecific clinical symptoms, and the chest radiographs do not always reveal classical miliary changes. Atypical presentations like cryptic miliary TB and acute respiratory distress syndrome often lead to delayed diagnosis. High-resolution computed tomography (HRCT) is relatively more sensitive and shows randomly distributed miliary nodules. In extrapulmonary locations, ultrasonography, CT, and magnetic resonance imaging are useful in discerning the extent of organ involvement by lesions of miliary TB. Recently, positron-emission tomographic CT has been investigated as a promising tool for evaluation of suspected TB. Fundus examination for choroid tubercles, histopathological examination of tissue biopsy specimens, and rapid culture methods for isolation of M. tuberculosis in sputum, body fluids, and other body tissues aid in confirming the diagnosis. Several novel diagnostic tests have recently become available for detecting active TB disease, screening for latent M. tuberculosis infection, and identifying drug-resistant strains of M. tuberculosis. However, progress toward a robust point-of-care test has been limited, and novel biomarker discovery remains challenging. A high index of clinical suspicion and early diagnosis and timely institution of antituberculosis treatment can be lifesaving. Response to first-line antituberculosis drugs is good, but drug-induced hepatotoxicity and drug–drug interactions in HIV/TB coinfected patients create significant problems during treatment. Data available from randomized controlled trials are insufficient to define the optimum regimen and duration of treatment in patients with drug-sensitive as well as drug-resistant miliary TB, including those with HIV/AIDS, and the role of adjunctive corticosteroid treatment has not been properly studied. Research is going on worldwide in an attempt to provide a more effective vaccine than bacille Calmette–Guérin. This review highlights the epidemiology and clinical manifestation of miliary TB, challenges, recent advances, needs, and opportunities related to TB diagnostics and treatment.

Miliary tuberculosis in the chemotherapy era: with a clinical review in 69 American adults.

G Schecter,  Philip C. Hopewell,  Anthony D Elias … (1990)
Human immunodeficiency virus (HIV) serology was performed in non-Asian-born patients 18-65 years old with newly diagnosed tuberculosis at a county tuberculosis clinic, and demographic and clinical features of HIV-seropositive and HIV-seronegative patients were compared. Sixty of 128 eligible patients agreed to participate, of whom 17 (28%) were seropositive. Risk of HIV was associated with homosexual contact, intravenous drug use, or both; however, 4 (24%) of the 17 seropositives denied risk behaviors. Significantly more blacks (48%) than whites (10%) or Latinos (20%) were HIV-seropositive (P less than .01). Site of disease, tuberculin reactivity, response to therapy, drug toxicity, and relapse did not differ significantly between groups. HIV-seropositive patients had significantly lower median CD4+ cell counts (326/mm3, range 23-742/mm3, vs. 929/mm3, range 145-2962/mm3, P less than .0005) and median CD4+:CD8+ ratios (0.50, range 0.14-1.07 vs. 1.54, range 0.35-4.36, P less than .0001). HIV infection is associated with clinically typical tuberculosis and HIV screening of tuberculosis patients is recommended in areas where HIV is endemic.