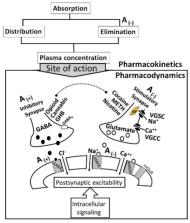 Millions of people around the world drink alcoholic beverages to cope with the stress of modern lifestyle. Although moderate alcohol drinking may have some relaxing and euphoric effects, uncontrolled drinking exacerbates the problems associated with alcohol abuse that are exploding in quantity and intensity in the United States and around the world. Recently, mixing of alcohol with other drugs of abuse (such as opioids, cocaine, methamphetamine, nicotine, cannabis, and γ-hydroxybutyric acid) and medications has become an emerging trend, exacerbating the public health concerns. Mixing of alcohol with other drugs may additively or synergistically augment the seriousness of the adverse effects such as the withdrawal symptoms, cardiovascular disorders, liver damage, reproductive abnormalities, and behavioral abnormalities. Despite the seriousness of the situation, possible mechanisms underlying the interactions is not yet understood. This has been one of the key hindrances in developing effective treatments. Therefore, the aim of this article is to review the consequences of alcohol’s interaction with other drugs and decipher the underlying mechanisms.

Christian Lüscher,  Robert C. Malenka (2011)
Addictive drugs have in common that they target the mesocorticolimbic dopamine (DA) system. This system originates in the ventral tegmental area (VTA) and projects mainly to the nucleus accumbens (NAc) and prefrontal cortex (PFC). Here, we review the effects that such drugs leave on glutamatergic and GABAergic synaptic transmission in these three brain areas. We refer to these changes as drug-evoked synaptic plasticity, which outlasts the presence of the drug in the brain and contributes to the reorganization of neural circuits. While in most cases these early changes are not sufficient to induce the disease, with repetitive drug exposure, they may add up and contribute to addictive behavior. Copyright © 2011 Elsevier Inc. All rights reserved.

Is there a common molecular pathway for addiction?

Eric J. Nestler (2005)
Drugs of abuse have very different acute mechanisms of action but converge on the brain's reward pathways by producing a series of common functional effects after both acute and chronic administration. Some similar actions occur for natural rewards as well. Researchers are making progress in understanding the molecular and cellular basis of these common effects. A major goal for future research is to determine whether such common underpinnings of addiction can be exploited for the development of more effective treatments for a wide range of addictive disorders.

E. Castillo-Montiel,  Thomas Younts,  Jerald Chavez … (2012)
Endocannabinoids are key modulators of synaptic function. By activating cannabinoid receptors expressed in the central nervous system, these lipid messengers can regulate several neural functions and behaviors. As experimental tools advance, the repertoire of known endocannabinoid-mediated effects at the synapse, and their underlying mechanism, continues to expand. Retrograde signaling is the principal mode by which endocannabinoids mediate short- and long-term forms of plasticity at both excitatory and inhibitory synapses. However, growing evidence suggests that endocannabinoids can also signal in a nonretrograde manner. In addition to mediating synaptic plasticity, the endocannabinoid system is itself subject to plastic changes. Multiple points of interaction with other neuromodulatory and signaling systems have now been identified. In this Review, we focus on new advances in synaptic endocannabinoid signaling in the mammalian brain. The emerging picture not only reinforces endocannabinoids as potent regulators of synaptic function but also reveals that endocannabinoid signaling is mechanistically more complex and diverse than originally thought. Copyright © 2012 Elsevier Inc. All rights reserved.