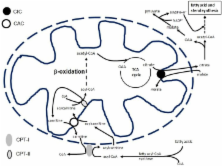 Transcriptional regulation of genes involved in fatty acid metabolism is considered the major long-term regulatory mechanism controlling lipid homeostasis. By means of this mechanism, transcription factors, nutrients, hormones and epigenetics control not only fatty acid metabolism, but also many metabolic pathways and cellular functions at the molecular level. The regulation of the expression of many genes at the level of their transcription has already been analyzed. This review focuses on the transcriptional control of two genes involved in fatty acid biosynthesis and oxidation: the citrate carrier (CIC) and the carnitine/ acylcarnitine/carrier (CAC), which are members of the mitochondrial carrier gene family, SLC25. The contribution of tissue-specific and less tissue-specific transcription factors in activating or repressing CIC and CAC gene expression is discussed. The interaction with drugs of some transcription factors, such as PPAR and FOXA1, and how this interaction can be an attractive therapeutic approach, has also been evaluated. Moreover, the mechanism by which the expression of the CIC and CAC genes is modulated by coordinated responses to hormonal and nutritional changes and to epigenetics is highlighted.

S. Kersten, J. Seydoux, J Peters … (1999)
Prolonged deprivation of food induces dramatic changes in mammalian metabolism, including the release of large amounts of fatty acids from the adipose tissue, followed by their oxidation in the liver. The nuclear receptor known as peroxisome proliferator-activated receptor alpha (PPARalpha) was found to play a role in regulating mitochondrial and peroxisomal fatty acid oxidation, suggesting that PPARalpha may be involved in the transcriptional response to fasting. To investigate this possibility, PPARalpha-null mice were subjected to a high fat diet or to fasting, and their responses were compared with those of wild-type mice. PPARalpha-null mice chronically fed a high fat diet showed a massive accumulation of lipid in their livers. A similar phenotype was noted in PPARalpha-null mice fasted for 24 hours, who also displayed severe hypoglycemia, hypoketonemia, hypothermia, and elevated plasma free fatty acid levels, indicating a dramatic inhibition of fatty acid uptake and oxidation. It is shown that to accommodate the increased requirement for hepatic fatty acid oxidation, PPARalpha mRNA is induced during fasting in wild-type mice. The data indicate that PPARalpha plays a pivotal role in the management of energy stores during fasting. By modulating gene expression, PPARalpha stimulates hepatic fatty acid oxidation to supply substrates that can be metabolized by other tissues.

Ferdinando Palmieri (2004)
The mitochondrial carriers (MCs) shuttle a variety of metabolites across the inner mitochondrial membrane (i.m.m.). In man they are encoded by the SLC25 genes. Some MCs have isoforms encoded by different SLC25 genes, whereas the phosphate carrier has two variants arising from an alternative splicing of SLC25A3. Six MCs have been sequenced after purification, and many more have been identified from their transport and kinetic properties following heterologous over-expression and reconstitution into liposomes. All MCs of known function belong to the same protein family, since their polypeptide chains consist of three tandemly related sequences of about 100 amino acids, and the repeats of the different carriers are homologous. They probably function as homodimers, each monomer being folded in the membrane into six transmembrane segments. The functional information obtained in studies with mitochondria and/or the reconstituted system has helped to gain an insight into the physiological role of the MCs in cell metabolism, as have tissue distribution, the use of knock-out mice (and/or yeast) and over-expression in human cell lines (or yeast) of individual carriers and isoforms. At the same time, the cloning and functional identification of many SLC25 genes has made it possible (i) to identify the genes (and their defects) responsible for some diseases, e.g. Stanley syndrome and Amish microcephaly, and (ii) where the genes were already known, to characterize the function of the gene products and hence understand the molecular basis and the symptoms of the diseases, e.g. hyperornithinaemia, hyperammonaemia and homocitrullinuria (HHH) syndrome and type II citrullinemia. It is likely that further extension and functional characterization of the SLC25 gene family will elucidate other diseases caused by MC deficiency.