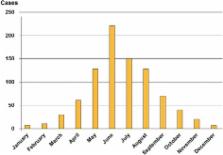 Journal: The Journal of Venomous Animals and Toxins Including Tropical Diseases

Snakebites cause considerable death and injury throughout the globe, particularly in tropical regions, and pose an important yet neglected threat to public health. In 2008, the Centre Anti Poison et de Parmacovigilance du Maroc (CAPM) started to set up a specific strategy for the control of snakebites that was formalized in 2012. The aim of the present study is to describe and update the epidemiological characteristics of snakebites notified to CAPM between 2009 and 2013.

This retrospective five-year study included all cases of snakebites notified to CAPM by mail or phone.

Despite specific efforts to better understand the epidemiology of snakebites in Morocco (incidence, severity, snake species involved), it remains underestimated. Therefore, further work is still necessary to ensure accessibility of appropriate antivenom against venomous species and to improve the management of envenomation in Morocco.

Estimate of the burden of snakebites in sub-Saharan Africa: a meta-analytic approach.

Jean-Philippe Chippaux (2011)
Snakebites represent an important neglected public health problem in many developing countries. There is a lack of epidemiological data, which would be very useful for the organisation of snakebite management and provision of antivenom. An extensive literature search for the years 1970-2010 was performed. Data were analysed using meta-analysis to take into account the heterogeneity between the studies and their respective weight. Incidence, mortality and population at risk were estimated after stratification according to the environment (urban or rural) and survey methodologies (national, hospital or community studies). The incidence of snakebite was inversely correlated with population density. The number of envenomings was estimated at 314,078 [CI95% = 251,513-377,462], of which 95% occurred in rural areas. The remainder occurred in cities. The annual mortality was estimated at 7,331 [5,148-9,568], of which 97% occurred in a rural environment. The annual number of amputations ranged from 5,908 to 14,614. The population most at risk was young men engaged in agricultural or pastoral labours. Household surveys indicated that actual incidence and mortality were likely 3-5 times higher. The difference maybe explained by treatment seeking behaviour. However, incidences and mortalities reported here reflect the number of patients who attend modern health facilities, giving underestimated figures of the burden of snakebites in sub-Saharan Africa but realistic current requirements for antivenoms. Copyright © 2011 Elsevier Ltd. All rights reserved.

J.-P. Chippaux,  M Goyffon (1998)
A century after the discovery of antivenom and despite real progress undertaken in its manufacture, its use remains largely empirical. Recent studies of pharmacokinetics of envenoming permitted improved understanding of immunotherapy. Improved purification of the antivenom by using immunoglobulin fragments has lead to increased tolerance and efficiency of antivenom. The respective advantages and disadvantages of F(ab')2 and F(ab) are discussed in relation to neutralising efficacy and clearance from the circulation. Although the time during which the action of antivenom remains beneficial after the bite is unknown, the superiority of intravenous administration has now been proved. Although immunisation procedures and purification and use of IgG fragments can be improved using modern technology, the future of immunotherapy seems promising. It is vital that therapeutic protocols should be rigidly adhered to in order to optimise immunotherapy. The use of vaccination has yet to be explored.

Biogeography and conservation of viperids from North-West Africa: An application of ecological niche-based models and GIS