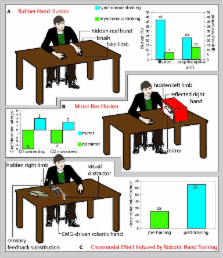 Today, the anthropomorphism of the tools and the development of neural interfaces require reconsidering the concept of human-tools interaction in the framework of human augmentation. This review analyses the plastic process that the brain undergoes when it comes into contact with augmenting artificial sensors and effectors and, on the other hand, the changes that the use of external augmenting devices produces in the brain. Hitherto, few studies investigated the neural correlates of augmentation, but clues on it can be borrowed from logically-related paradigms: sensorimotor training, cognitive enhancement, cross-modal plasticity, sensorimotor functional substitution, use and embodiment of tools. Augmentation modifies function and structure of a number of areas, i.e., primary sensory cortices shape their receptive fields to become sensitive to novel inputs. Motor areas adapt the neuroprosthesis representation firing-rate to refine kinematics. As for normal motor outputs, the learning process recruits motor and premotor cortices and the acquisition of proficiency decreases attentional recruitment, focuses the activity on sensorimotor areas and increases the basal ganglia drive on the cortex. Augmentation deeply relies on the frontoparietal network. In particular, premotor cortex is involved in learning the control of an external effector and owns the tool motor representation, while the intraparietal sulcus extracts its visual features. In these areas, multisensory integration neurons enlarge their receptive fields to embody supernumerary limbs. For operating an anthropomorphic neuroprosthesis, the mirror system is required to understand the meaning of the action, the cerebellum for the formation of its internal model and the insula for its interoception. In conclusion, anthropomorphic sensorized devices can provide the critical sensory afferences to evolve the exploitation of tools through their embodiment, reshaping the body representation and the sense of the self.

The memory function of sleep.

Susanne Diekelmann,  Jan Born (2010)
Sleep has been identified as a state that optimizes the consolidation of newly acquired information in memory, depending on the specific conditions of learning and the timing of sleep. Consolidation during sleep promotes both quantitative and qualitative changes of memory representations. Through specific patterns of neuromodulatory activity and electric field potential oscillations, slow-wave sleep (SWS) and rapid eye movement (REM) sleep support system consolidation and synaptic consolidation, respectively. During SWS, slow oscillations, spindles and ripples - at minimum cholinergic activity - coordinate the re-activation and redistribution of hippocampus-dependent memories to neocortical sites, whereas during REM sleep, local increases in plasticity-related immediate-early gene activity - at high cholinergic and theta activity - might favour the subsequent synaptic consolidation of memories in the cortex.

Neuronal ensemble control of prosthetic devices by a human with tetraplegia.

Leigh Hochberg,  Maryam Saleh,  Jon A Mukand … (2006)
Neuromotor prostheses (NMPs) aim to replace or restore lost motor functions in paralysed humans by routeing movement-related signals from the brain, around damaged parts of the nervous system, to external effectors. To translate preclinical results from intact animals to a clinically useful NMP, movement signals must persist in cortex after spinal cord injury and be engaged by movement intent when sensory inputs and limb movement are long absent. Furthermore, NMPs would require that intention-driven neuronal activity be converted into a control signal that enables useful tasks. Here we show initial results for a tetraplegic human (MN) using a pilot NMP. Neuronal ensemble activity recorded through a 96-microelectrode array implanted in primary motor cortex demonstrated that intended hand motion modulates cortical spiking patterns three years after spinal cord injury. Decoders were created, providing a 'neural cursor' with which MN opened simulated e-mail and operated devices such as a television, even while conversing. Furthermore, MN used neural control to open and close a prosthetic hand, and perform rudimentary actions with a multi-jointed robotic arm. These early results suggest that NMPs based upon intracortical neuronal ensemble spiking activity could provide a valuable new neurotechnology to restore independence for humans with paralysis.

This article was submitted to the journal Frontiers in Systems Neuroscience.