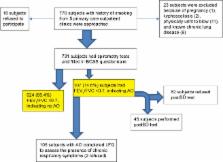 People aged ≥30 years with a history of smoking who attended public outpatient clinics for primary care services were included in this study.

A cross-sectional survey in five clinics in Hong Kong using the Breathlessness, Cough, and Sputum Scale, the Lung Function Questionnaire, and office spirometry was conducted.

In total, 731 subjects (response rate =97.9%) completed the questionnaires and spirometry tests. Most of the subjects were men (92.5%) in the older age group (mean age =62.2 years; standard deviation =11.7). Of the 731 subjects, 107 had AO, giving a prevalence of 14.6% (95% confidence interval =12.1–17.2); 45 subjects with AO underwent a postbronchodilator test. By classifying the severity of chronic obstructive pulmonary disease using the Global Initiative for Chronic Obstructive Lung Disease, 27 (60%) were considered to be in mild category and 18 (40%) in moderate category. None of them belonged to the severe or very severe category. The total score of Lung Function Questionnaire showed that majority of the subjects with AO also had chronic cough, wheezing attack, or breathlessness, although most did not show any acute respiratory symptoms in accordance with the Breathlessness, Cough, and Sputum Scale. Diagnosis of AO was positively associated with the number of years of smoking (odds ratio =1.044, P=0.035) and being normal or underweight (odds ratio =1.605, P=0.046). It was negatively associated with a history of hypertension (odds ratio =0.491, P=0.003).

One-seventh of smokers have undiagnosed AO. Spirometry screening of smokers should be considered in order to diagnose AO at an early stage, with an emphasis on smoking cessation.

PAUL D. SCANLON,  JOHN CONNETT,  LANCE WALLER … (2000)
Previous studies of lung function in relation to smoking cessation have not adequately quantified the long-term benefit of smoking cessation, nor established the predictive value of characteristics such as airway hyperresponsiveness. In a prospective randomized clinical trial at 10 North American medical centers, we studied 3, 926 smokers with mild-to-moderate airway obstruction (3,818 with analyzable results; mean age at entry, 48.5 yr; 36% women) randomized to one of two smoking cessation groups or to a nonintervention group. We measured lung function annually for 5 yr. Participants who stopped smoking experienced an improvement in FEV(1) in the year after quitting (an average of 47 ml or 2%). The subsequent rate of decline in FEV(1) among sustained quitters was half the rate among continuing smokers, 31 +/- 48 versus 62 +/- 55 ml (mean +/- SD), comparable to that of never-smokers. Predictors of change in lung function included responsiveness to beta-agonist, baseline FEV(1), methacholine reactivity, age, sex, race, and baseline smoking rate. Respiratory symptoms were not predictive of changes in lung function. Smokers with airflow obstruction benefit from quitting despite previous heavy smoking, advanced age, poor baseline lung function, or airway hyperresponsiveness.