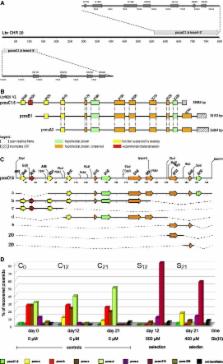 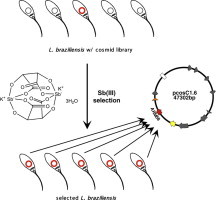 Protozoa of the Leishmania genus cause a variety of disease forms that rank at the top of the list of neglected tropical diseases. Anti-leishmanial drugs based on pentavalent antimony have been the mainstay of therapy for over 60 years and resistance against them is increasingly encountered in the field. The biochemical basis for this is poorly understood and likely diverse. No stringent correlation between genetic markers and antimony resistance has so far been shown, prompting us to use a functional cloning approach to identify markers of resistance. Using gene libraries derived from drug-resistant and drug-sensitive Leishmania braziliensis clinical isolates in a functional cloning strategy, we repeatedly selected one gene locus located on chromosome 20 whose amplification confers increased antimony (III) resistance in vitro to an otherwise sensitive L. braziliensis clone. The gene responsible for the effect encodes a previously hypothetical protein that we dubbed LbrARM58. It comprises four repeats of a domain of unknown function, DUF1935, one of them harbouring a potential trans-membrane domain. The gene is so far unique to the Leishmania genus, while a structurally related gene without antimony resistance functionality is also found in Trypanosoma spp. Overexpression of LbrARM58 also confers antimony resistance to promastigotes and intracellular amastigotes of the related species Leishmania infantum, indicating a conserved function in Old World and New World Leishmania species. Our results also show that in spite of their RNAi system, L. braziliensis promastigotes can serve as acceptor cells for episomally propagated cosmid libraries, at least for the initial stages of functional cloning efforts.

Jeremy C. Mottram,  Thomas Otto,  Christiane Hertz-Fowler … (2011)
Leishmania parasites cause a spectrum of clinical pathology in humans ranging from disfiguring cutaneous lesions to fatal visceral leishmaniasis. We have generated a reference genome for Leishmania mexicana and refined the reference genomes for Leishmania major, Leishmania infantum, and Leishmania braziliensis. This has allowed the identification of a remarkably low number of genes or paralog groups (2, 14, 19, and 67, respectively) unique to one species. These were found to be conserved in additional isolates of the same species. We have predicted allelic variation and find that in these isolates, L. major and L. infantum have a surprisingly low number of predicted heterozygous SNPs compared with L. braziliensis and L. mexicana. We used short read coverage to infer ploidy and gene copy numbers, identifying large copy number variations between species, with 200 tandem gene arrays in L. major and 132 in L. mexicana. Chromosome copy number also varied significantly between species, with nine supernumerary chromosomes in L. infantum, four in L. mexicana, two in L. braziliensis, and one in L. major. A significant bias against gene arrays on supernumerary chromosomes was shown to exist, indicating that duplication events occur more frequently on disomic chromosomes. Taken together, our data demonstrate that there is little variation in unique gene content across Leishmania species, but large-scale genetic heterogeneity can result through gene amplification on disomic chromosomes and variation in chromosome number. Increased gene copy number due to chromosome amplification may contribute to alterations in gene expression in response to environmental conditions in the host, providing a genetic basis for disease tropism.

Life without transcriptional control? From fly to man and back again.

Retention and Loss of RNA Interference Pathways in Trypanosomatid Protozoans

This is an open-access article distributed under the terms of the Creative Commons Attribution-NonCommercial-No Derivative Works License, which permits non-commercial use, distribution, and reproduction in any medium, provided the original author and source are credited.